Richard Keogh is ready to answer Ireland’s call on Friday night in Glasgow with no regrets over his decision to declare for the Boys in Green.

The Republic of Ireland face Scotland at the end of a week which has seen a debate over players opting to represent countries other than that of their birth grow increasingly tetchy, with Aiden McGeady and James McCarthy both preparing to return to their country of birth.

But 28-year-old Derby defender Keogh, who was born in the Essex town of Harlow, had no decision to make when his time came.

He said: "For me, it was a no-brainer. My dad was born in Carlow and moved over to England when he was a bit older, but my nan and grandad lived there all their lives.

"I played for the Under 19s and to me, the natural progression was to play for the Under 21s and hopefully the seniors. That was my aim, so for me it was a very proud moment when I got the call to play for Ireland - and it was the best decision I ever made."

Keogh could well line up against the Scots at Celtic Park with Stoke's Marc Wilson having been ruled out through injury, and the atmosphere is certain to be intense with McGeady and McCarthy seemingly certain to be given a hostile reception.

It will be particularly special for Keogh if he is asked to partner John O'Shea at the heart of Martin O'Neill's defence, and far from fearing the mission, he insists he would relish the chance to test himself against strikers he knows well.

Keogh said: "It would be something I would really enjoy and really relish. I would relish the challenge of playing - that's why you are in football, to play big games, and they don't come much bigger than this. If I am called upon, then I will be ready, and not just me, but the whole group.

"They [Scotland] have obviously got good players. [Steven] Fletcher is in good form and scoring goals, but obviously knowing Chris Martin and Jonny Russell from Derby, I know what threat they possess.

"But it's built up to be an exciting game and it should be a great atmosphere."

That atmosphere is something Ward has experienced once before, and he is looking forward to revisiting a stadium which holds a special place in the hearts of many of his compatriots.

He said: "I have played there once, in a pre-season friendly. I think there were about 30,000 people there. It's a very special place and I think any Irish person going there will tell you how special it is to them, so it's a game we are all really looking forward to." 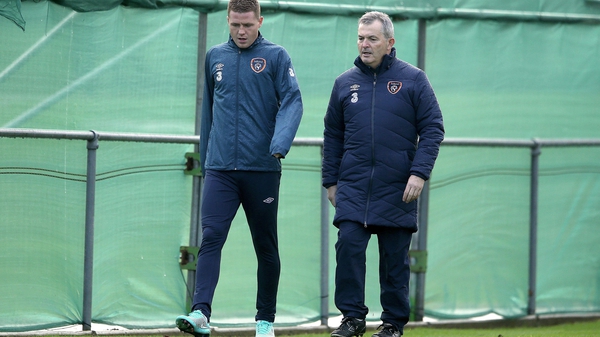