It’s a balmy 25 degrees as I arrive in Chania in Western Crete, briefly escaping the clutches of the Irish winter.

Taxi driver Christos Pontikakis is a great ambassador for his homeland, welcoming me profusely and enthusing on everything from traditional Greek music and food to that familiar international ice-breaker: football.

Noticing a red pennant adorned with a shamrock on his dashboard, I ask whether he’s a Panathinaikos fan, being familiar with the Athenian side’s St Patrick-approved logo.

He’s not. The crest is that of Platanias FC, the football team of the charming coastal village we’re en route to, which boasts a modest permanent population of 800.

It’s a summer beach resort, particularly popular with Scandinavians, and many businesses are already closing for the winter as we arrive.

“Everyone knows Panathinaikos are the Green Shamrocks. We are the Red Shamrocks,” says Christos. “But, we are also in the Superleague. It’s incredible!”

It certainly is. Platanias was founded in 1931 and for almost 80 years they contested the regional Cretan championship, with varying degrees of success.

Now the villagers in the Greek top tier against the likes of Athens (population 3 million) giants Panathinaikos and Olympiakos, who beat Juventus in the Champions League last week. 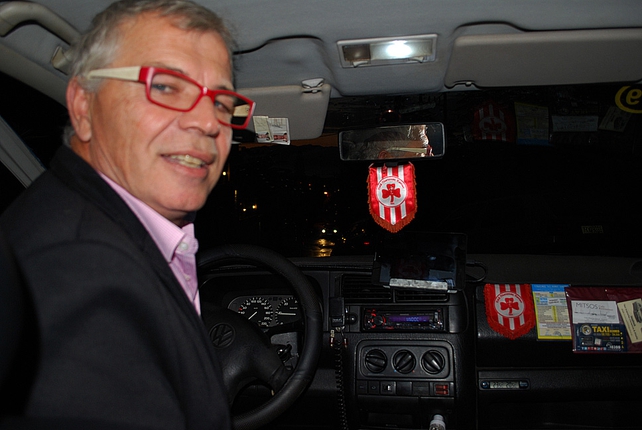 The next day, Christos (above) introduces me to George Georgakakis, press officer for the Superleague’s smallest side, who discusses the club’s meteoric rise.

“Some businessmen in Platanias, who are very close to the team, and love the team, started a new try when Platanias was in the third division,” he says. “It was the highest they’d ever been but in just four years they managed to get to the Superleague.

Reaching the semi-professional south division of the national third tier (Football League 2) in 2009/10 was Platanias’ biggest achievement to date and the islanders were delighted to avoid relegation by just two points.

The following year saw ambition start to bear fruit, however, as Platanias finished fifth, 10 points ahead of local rivals Chania.

Thanks to the fall-out from the match-fixing and fraud scandal known as Koriopolis, that proved enough to secure promotion to the second highest division, the Football League.

Platanias repeated that fifth-placed finish one tier up in 2012/13 and were unlikely qualifiers for the Superleague play-offs, which are run as a four-team group.

Against the odds, the Red Shamrocks edged out the third-placed regular-season finishers Kallithea (from Athens) to top the table and reach the promised land of the Superleague, where they are now in their third season.

“After we managed to get to the super league, we spent more than €200,000 reconstructing our training centre and we did something extraordinary,” George recounts. “We managed to have our stadium, our home, ready in two months.

Platanias’ ground, the neat 4,000 seater Perivolia Municipal Stadium (below), is 12km away in the Chania suburb of Mournies, nestled between the city and the mountains, and was rapidly developed with the assistance of the local authorities. 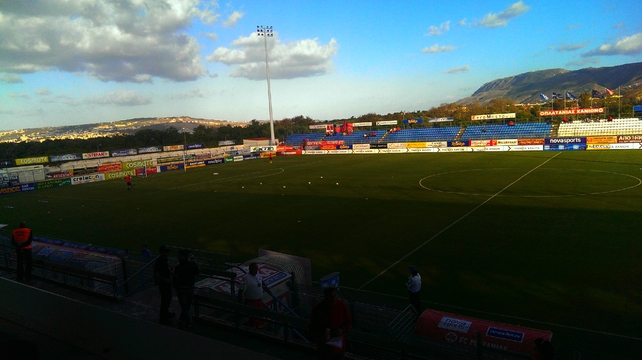 “Our stadium belongs to the municipality of Chania,” says George. “They gave a big amount but without the vice-president Manolis Mathioulakis (pictured below along with coach Giannis Christopoulos, centre, and George, right), who is now president, the former president Stelios Varouxakis, and the council of the club it wouldn’t have been possible.

George insists that the team are far from a rich man’s plaything however, and are focused on being a model club in a football environment that has suffered its fair share of administrative negligence.

“We’re trying to do it step by step and get better every month and every year on all levels. 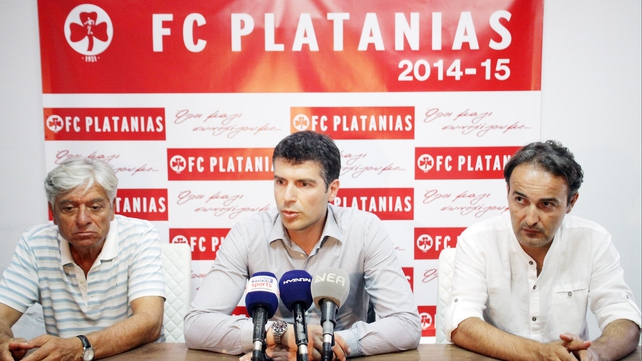 120,000 people live in the regional hub and Ryanair destination of Chania city, 11km down the coast from Platanias, but the better-supported Chania FC have never reached the top flight.

Chania now groundshare with Platanias in the Perivolia, though, and are just one promotion away from joining their neighbours in the Superleague.

Although one local journalist tells me their promotion would be a disaster for Platanias – “Most of the fans are from Chania, if the fans go up they’ll switch support” – George is confident West Crete could support two teams at the elite level, especially as there is no history of enmity between them.

“I don’t think it would be a problem,” he insists. “It would be something that would probably never happen again. I hope the other team go up too, it would be fantastic. Heraklion [Cretan capital and largest city], for example, has two teams, OFI and Ergotelis.

“When Platanias managed to be in the Superleague it was the first time that a team from Chania achieved something so extraordinary.

“The people here help us, like us and support the team. We sell about 1,500 season tickets here and many companies sponsor us.”

“We don’t have a big rival. Every game is special. We respect all the teams, they all have a great history. The only thing we want is to see our team grow every year, get better and better on every level and increase our fans in Greece and abroad.

Nor is he relying on the appeal of the underdog.

“Some fans are always with the small team, some with the big team. Our goal is to increase our fans because we will perform well, we will have a good try and do everything right.” 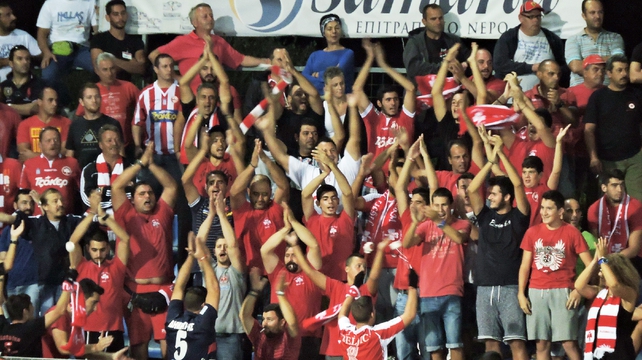 That evening, Platanias play Skoda Xanthi in a crucial home game. Although finishing a credible ninth of 16 teams in their inaugural Superleague campaign under former Cyprus manager Angelos Anastasiadis and knocking Panathinaikos out of the Cup, they narrowly avoided relegation last season.

They have started this term badly and are third from bottom with just three points from five games. Four teams will lose their top-flight status in a reorganisational season that will be familiar to League of Ireland fans.

The ‘Ultras’ arrive an hour before kick-off, beating drums and waving flags as they occupy a designated corner of the ground. They prove to be the loudest fans but are far removed from the fired-up flare flingers many will have seen previously in the Athens derbies.

“Platanias has a very good reputation in the league,” says George. “All the clubs that come here have no problems. Our fans are gentlemen. No hooligans, no bad situations. Many families come to the stadium and women and children feel safe and secure supporting their team.”

The atmosphere is indeed good-natured as the stadium fills to around two-thirds capacity by kick-off.

Platanias attempt to play possession football, resisting the urge to hoof it long and picking their passes carefully.

But too often, hard-working Spanish striker David Torres is left isolated up front and their moves break down.

Some players are wearing exotic squad numbers reminiscent of an NFL team (55, 84) and the tendency of players from both sides to throw themselves to the ground and make the most of tackles would bring a smile to observers of the more physically robust English and Irish leagues.

Visitors Xanthi look more dangerous in possession. Brazilian Cleyton Silva is pulling the strings and but for some wild finishing by Algerian forward Karim Sultani they should be ahead at the break. 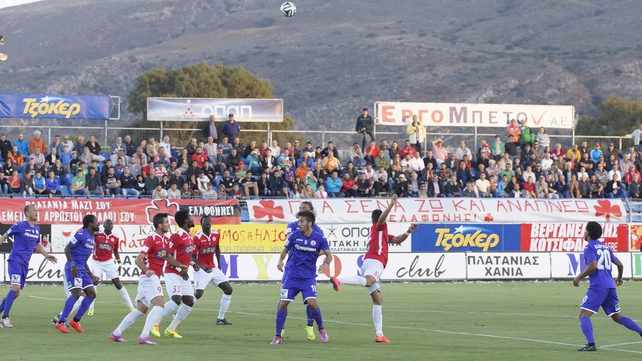 My journalist friend is unimpressed with what he’s seen so far.

“We're not very good,” he says. “We have a good young coach [42-year-old Christopoulos is in his first year in charge, in a league where the managerial merry-go-round spins dizzyingly fast] but we change too many players, 10 or 11 every year."

He reckons the game needs the introduction of Thomas Nazlidis, the captain and one of only two players (along with defender Alkis Dimitris) remaining from the team’s pre-Super League days.

“He’s been here since we were in the third division. He loves Platanias, he plays with passion. Only the coach knows why he doesn’t start.”

On 66 minutes, my colleague and the fans get their wish as local hero Nazlidis makes his entrance.

The skipper makes an immediate impact, beating two defenders and winning a penalty (below) with his first touch of the ball. He takes the spot-kick himself, stroking the ball confidently into the bottom-left corner.

The stadium erupts as a jaunty tune plays over the tannoy. Roy of the Rovers eat your heart out. 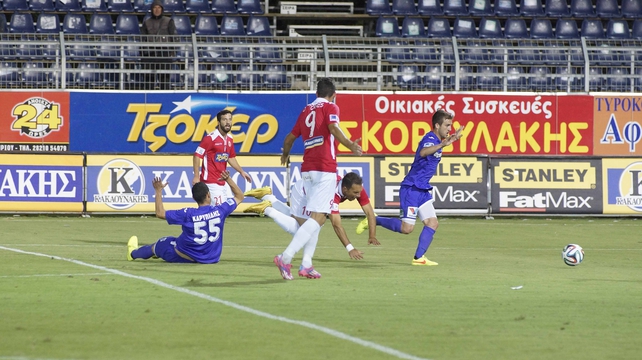 The last 20 minutes are more eventful than Platanias would like. Goalkeeper Kevin Olimpia is forced to make several saves, including tipping a late effort onto the bar.

But the Red Shamrocks hold on for their first home win of the season – one that lifts them out of the relegation zone.

For his match-winning cameo, Nazlidis wins the man-of-the-match award, presented by a shy girl from a local special-needs school.

George is a happy man.

“It was an important victory. It was the worst performance of the team [this season] but that’s the magic of football. When we played well we didn’t manage to get the result and today we did.” 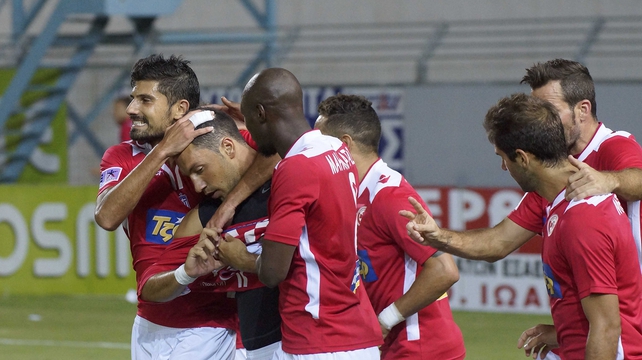 Before taking my leave, I ask George about the origins of the shamrock crest.

“There are two stories,” he tells me. “One is that there was a lot of shamrock in Platanias and that was why the person who drew the badge included it.

“The other is that they wanted to draw the leaf of the Platanus tree [sycamore relative] but the artist made a mistake!”

No Irish connection then but the reason for the club’s red and white kit is just as appealing to the romantic.

“Our colours are red and white. The story goes that during World War 2, when the Germans occupied Crete, some members of Platanias stole some German flags and the women of the village made them into shirts.”

You can almost hear Hollywood pricking its ears. The following weekend Platanias record their second win on the bounce, away to Corfu side Kerkyra, and climb to the heady heights of ninth.

I've clearly brought the Red Shamrocks a little luck of the Irish. Who's to say the fairytale won't last that bit longer?