Derby came from two goals down to storm into the quarter-finals of the Capital One Cup by thrashing Fulham 5-2.

The hosts appeared to be cruising after Moussa Dembele's first Fulham goals fired them into a 2-0 lead shortly before half-time.

But Chris Martin pulled one back from the penalty before the interval and the Cottagers capitulated after the break, as goals by Johnny Russell, Republic of Ireland international Jeff Hendrick and two from Simon Dawkins sent the Sky Bet Championship leaders through.

It was the second time Derby have put five past Fulham this season, although the Londoners are a completely different side to the one sent out by Felix Magath that day in August.

Revitalised under caretaker boss Kit Symons, they had won five of their last eight games, and despite eight changes to their line-up they roared into the lead thanks to teenage striker Dembele, as well as some shambolic Derby defending.

In the 27th minute Craig Forsyth made the mistake of not looking when he played an attempted back pass to Kelle Roos, Dembele intercepted the ball and, having rounded the Rams keeper, rolled it into an empty net.

If that piece of defending was poor, what followed in the 45th minute was downright comical.

Roos inexplicably passed the ball to Omar Mascarell, the on-loan Real Madrid midfielder, who was promptly robbed on the edge of the box by the lurking Bryan Ruiz.

The stand-in Fulham skipper nudged the ball to Dembele, who had another simple task of slotting it past Roos to double the lead.

However, the spirit of generosity quickly spread to the Fulham defence when moments later, in first-half stoppage-time, Tim Hoogland needlessly handled Mascarell's free-kick and Martin stepped up to dispatch the penalty.

It proved a pivotal moment and fired-up Derby drew level within two minutes of the restart when Dawkins reached the byline and cut the ball back for Russell to rifle home from close range.

They took the lead in the 54th minute, Dawkins crashing in a superb angled drive from 20 yards which Gabor Kiraly got a hand to but could not prevent hitting the top corner.

Six minutes later, the Rams went further ahead when Forsyth flicked on Bryson's cross and left Hendrick with a simple finish from six yards out.

And at the end of a whirlwind 20-minute spell, the fifth arrived when Russell crossed from the right and Dawkins found the net with an extravagant backheel flick to put the seal on a stunning comeback. 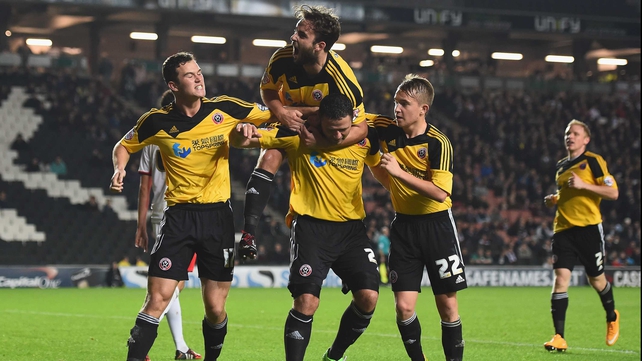 Two late goals by substitute Michael Higdon sent Sheffield United into the quarter-finals in dramatic fashion with a 2-1 victory at MK Dons.

The Blades, who reached the semi-finals of the FA Cup last season, now find themselves deep into another knockout competition with the prospect of a glamour tie to come in December.

After a non-event of a first half, Stefan Scougall should have put United in front when he headed over an open goal after Marc McNulty's cross had drifted over Dons goalkeeper David Martin.

The deadlock was finally broken after 67 minutes when Craig Alcock tripped Dele Alli in the penalty area and the Dons' on-loan Arsenal striker Benik Afobe calmly slotted in from the spot.

The Blades drew level with just four minutes left when Higdon headed Jose Baxter's cross into the bottom corner after a quickly-taken corner.

And they snatched victory in the third minute of stoppage time when Jamie Murphy's corner found its way through to Higdon, who smashed his shot into the net via a post.