Sevilla drew level on points with Barcelona at the top of La Liga when they snatched a 2-1 comeback victory at home to Villarreal, while champions Atletico Madrid won 1-0 in a bad-tempered clash at Getafe today.

Villarreal thought they had secured the points at the Sanchez Pizjuan when Luciano Vietto clipped the ball superbly over home goalkeeper Beto in the 79th minute.

However, with the home fans roaring encouragement Sevilla stormed back to equalise through Denis Suarez in the 88th and Carlos Bacca sealed the win with a penalty in added time, awarded when Giovani Dos Santos tripped Benoit Tremoulinas.

Sevilla won the Europa League last season and have made their best-ever start to a La Liga campaign, although it remains to be seen whether they can sustain their form long enough to mount a genuine title challenge.

Last season, Atletico were the first team apart from Real Madrid or Barca to win the league since Valencia in 2004 and Real, the European champions, look in especially ominous form.

"We didn't play our best football but the team put in the maximum effort," Bacca told reporters. "They scored a goal, a good goal, but we never gave up," added the Colombian.

"Sevilla were very good even if perhaps we lacked a bit of efficiency with the final pass. We are second (on goal difference) but with our feet on the ground."

With nine matches played, Barcelona, beaten 3-1 at Real in Saturday's 'Clasico', and Sevilla each have 22 points, with Real in third on 21.

Atletico have 20 points in fifth after a close-range effort from striker Mario Mandzukic five minutes before halftime secured victory at Getafe.

The club based in the Madrid suburbs lost defender Alexis to a straight red card after a clash with Mandzukic in the 58th minute, one of several unsavoury incidents during the game.

Valencia also have 20 points in fourth, above Atletico on goal difference, after they celebrated their imminent takeover by Singapore billionaire Peter Lim with a 3-1 win at home to Elche on Saturday.

In Sunday's other games, Malaga thrashed visiting Rayo Vallecano 4-0 and Espanyol were held to a 0-0 draw at home to promoted Deportivo La Coruna. 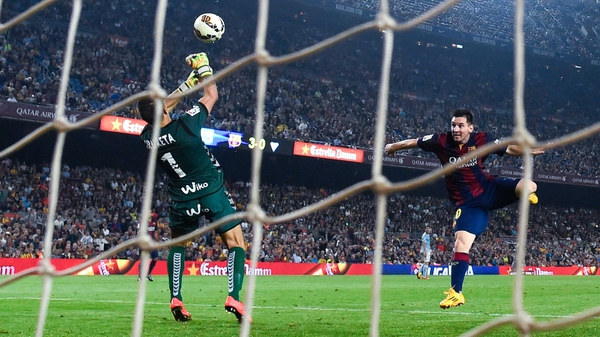 La Liga round-up: Barca and Real win ahead of Clasico