Everton FC has asked fans to avoid the centre of Lille after clashes between supporters of the Premier League club and police ahead of a Europa League Group H game.

Dozens of anti-riot police used teargas and warning shots to disperse around 200 English fans who had gathered at the city's main Grand Place early in the afternoon, police told Reuters.

A number of shop windows were broken in the 10-minute brawl and a British national had been arrested, a spokesperson said, adding that there had been no injuries.

"We advise Everton fans in Lille to avoid the main square in the city centre," the Premier League club said on its Twitter feed after the incidents.

A police source told Reuters the trouble started after British officers in plain-clothes who had travelled to Lille, tried to arrest an Everton fan they had recognised.

"There were just a few of them and they were quickly surrounded by a mob. They found shelter in a bookshop and the anti-riot police were called to take control of the situation," the source said.

The spokesperson earlier had said the anti-riot police had been deployed to "protect the surroundings from potential clashes" between fans of the two clubs.

sOME Everton fans suffered minor injuries after being attacked by a group of UP TO 50 men in Lille on Wednesday night.

A statement issued on Everton's official website on Thursday morning said: "The club has been made aware of an isolated incident in a bar in Lille on Wednesday evening in which a number of Evertonians were attacked by a group of around 50 local men.

"The club understands that two Everton fans suffered minor facial injuries and were taken to the local hospital and that this was the only incident in what was otherwise a good-natured evening in the city centre.

"The club are in continual contact with Merseyside police officers who are in Lille today and the city's police representatives.

"Supporters travelling to tonight's match are advised to utilise the travel information provided on the official website where updates on any safety matters will also be provided."

It is understood at least 5,500 Everton fans will be in attendance.

Meanwhile, the Toffees will be without the rested duo of Steven Naismith and Leon Osman.

Bryan Oviedo and Arouna Kone, only recently back involved after long-term injuries, are not yet fully match fit so have also sat out the trip to France, along with Kevin Mirallas (hamstring) and John Stones (ankle).

Veteran Frenchman Sylvain Distin, left out the matchday squad for the last four games, has been included in the travelling party. 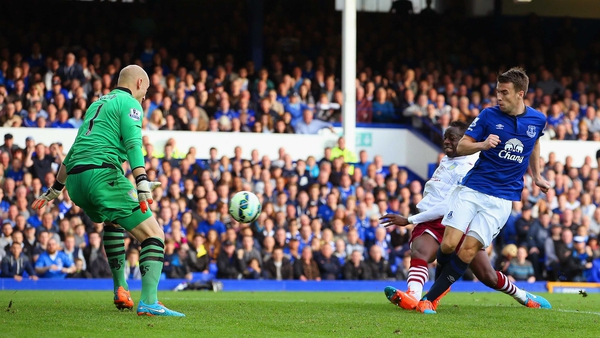