Everton remain top of Europa League Group H after playing out a 0-0 stalemate at Lille in a game overshadowed by trouble involving Toffees fans in the build-up.

The home side went closest to finding a goal in the first half when Idrissa Gueye struck wide.

The Toffees survived another scare after the break as on-loan Liverpool man Divock Origi fired off-target, before they went as near as they came to breaking the deadlock themselves, with Aiden McGeady seeing his effort spin off goalkeeper Vincent Enyeama and being cleared.

Genuine chances were few and far between, though, as Roberto Martinez's men claimed a point that takes the Group H leaders to a total of five from three games.

The contest was witnessed by around 5,500 Everton fans in the away end of the Stade Pierre Mauroy, but there was talk that as many as twice that amount in total had made the trip to Lille.

And the run-up to the match had been marred by Toffees supporters getting caught up in trouble in the city, including an attack on some of them at a bar by a group of at least 50 men, and a subsequent flare-up in the main square which saw French police use gas against them.

Despite that turbulence, those in the ground were in fine voice as the game got under way, although it was the hosts who made the brighter start of the two teams.

Sebastien Corchia had a shot deflected off Everton skipper Phil Jagielka in the opening couple of minutes and Florent Balmont then sent a useful delivery into the away box that neither Simon Kjaer nor Marko Basa were able to apply a finish to.

Origi, the teenager loaned back to Lille after joining Liverpool over the summer, looked keen to make a mark and put a couple of crosses in from the left that did not amount to anything.

At the other end, Samuel Eto'o played a one-two with Steven Pienaar but lost control of the return ball in front of goal.

Lille forward Ronny Rodelin then miscued an acrobatic effort before his team-mate Gueye went much closer to breaking the deadlock, turning and firing a shot from the edge of the box that just swerved wide of Tim Howard's post. 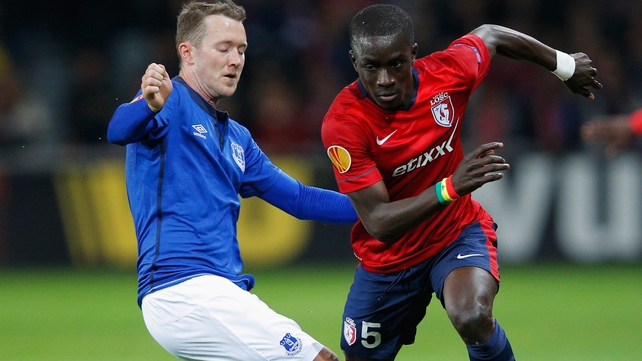 And after Rodelin had a shot from distance collected by Howard and Gueye scuffed wide, Ross Barkley - sporting a head bandage after being treated for an injury above his eye early on - swung a free-kick over the Lille bar.

The match appeared very much in need of a moment of magic and Origi looked to provide it in the 53rd minute, arrowing a shot towards the top corner that was not quite on target.

Eto'o curled a weak free-kick into Enyeama, and there was then an on-pitch flash-point after Lille appealed for a handball when a cross struck Leighton Baines in the area.

It led to a skirmish breaking out among the two sets of players, with Pienaar and Franck Beria each picking up a booking for their part in it. The corner that followed was flicked by Kjaer into the dangerzone, where Barkley - head bandage now removed - cleared.

Pienaar was then substituted for Romelu Lukaku, who immediately played in McGeady for a shot that hit Enyeama and squirmed towards goal, but was hacked away.

Howard subsequently caught an ambitious Balmont effort and Toffees full-back Tony Hibbert had a strike blocked, before Eto'o sent a shot curling wide and the match was confirmed as the goalless draw it had long looked destined to be.

Everton have a one-point lead over second-placed Wolfsburg, who won 4-2 in Krasnodar on Thursday, while Lille are third in the group on three points. 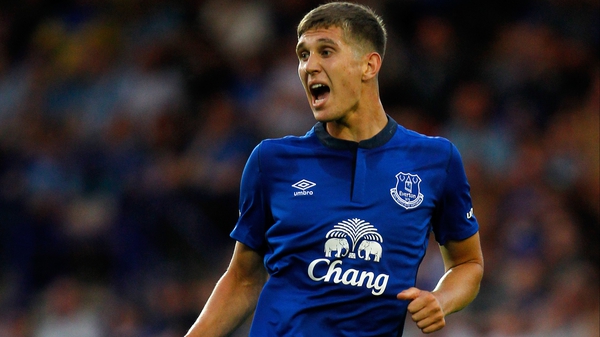 Everton's John Stones out for up to four months Soccer