Brendan Rodgers insists there is no reason to protect Raheem Sterling ahead of Wednesday's Champions League clash with Real Madrid at Anfield.

Sterling influenced all of Liverpool's goals in Sunday's edgy 3-2 victory at QPR, back in club action after criticism of England's decision to use him sparingly in Euro 2016 qualifiers.

Rodgers once again refuted suggestions the 19-year-old is handed two days' rest after club matches and confirmed Sterling will not be held back ahead of the Real showdown.

"His recovery will be the way it is every single week and game that we play; there's no difference," said Rodgers.

"We always train: I think there was probably some sort of misinformation that went out.

"I said in the press conference the other day, and I can repeat for those that didn't hear it.

"When we play a game like today, tomorrow the players that have played today over the 70-minute mark will have a recovery session inside.

"The other players will work, the second day they will be outside on the field.

"The difference with the recovery on the second day, it's still tactical work, it's still technical work, but the density of the session is closed right down.

"So it will be no different from every other session.

"I call the second day recovery for me a football recovery session - they are not sat at home with their feet up and a hot chocolate.

"He'll be at Anfield on Tuesday night training and working, getting ready for the game."

"He'll be at Anfield on Tuesday night training and working, getting ready for the game" Brendan Rodgers comments on Raheem Sterling

Liverpool squeaked past luckless QPR, who dominated large swathes but paid a bitter price owing to own goals from Richard Dunne and Steven Caulker.

Eduardo Vargas equalised twice in the dying stages, before Caulker turned a Sterling pass into his own net.

The former Tottenham manager shrugged off speculation linking the likes of Tim Sherwood to his Loftus Road post, saying: "I couldn't give a monkey's.

"If it ain't good enough, it's up to other people to make their mind up.

"I don't go home and worry about speculation, I'm 68 nearly.

"What am I worried about? I'm not 35 with five kids trying to pay a mortgage.

"I love my job, and I do my best: I can't do any more and there's no one could do any better here at the moment than me.

"I hear other names mentioned, but they couldn't do any better than what I can do, that's for sure." 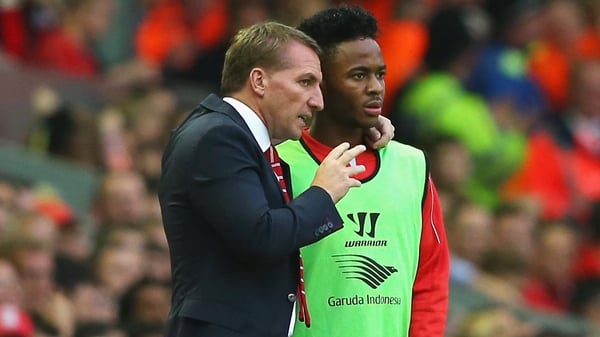