Ronny Deila got the required ruthlessness from his Celtic side as they routed bottom side Ross County 5-0 in their Premiership clash in Dingwall.

Pressure on the Hoops boss had increased following the shock 1-0 home defeat to Hamilton in their last outing, which meant 10 points had been shipped in eight games.

The Norwegian claimed missed chances had cost the Parkhead side dearly against Accies but there was no such accusation to be made in the Highlands as goals from John Guidetti, Callum McGregor, Anthony Stokes and Jason Denayer had the points safe by the interval.

Stokes grabbed his second with a long-distance drive in the 56th minutes as the champions made a statement of intent to the rest of the league.

It will be with some much-needed confidence that Celtic turn their attention to the home Europa League game against Romanian side Astra on Thursday night albeit Guidetti will again have to drop out as he was not registered in time to play in the group stages.

County had had taken four points from their previous six but they were put firmly in their place and can only hope that this stinging defeat does not linger as they continue their battle to get away from the relegation zone.

The international break had allowed some Celtic injuries to clear and Deila brought back Mikael Lustig, Charlie Mulgrew and McGregor.

Efe Ambrose and Mubarak Wakaso started among the substitutes with Kris Commons out altogether.

Ross County boss Jim McIntyre gave a debut to 32-year-old Canada midfielder Terry Dunfield, signed after leaving Oldham in the summer, with another new signing Paul Quinn on the bench, while on-loan midfielder Jackson Irvine was unable to play against his parent club.

The visiting fans made themselves heard as the game took shape in the early stages and they soon had plenty to sing about.

Guidetti's opener in the 11th minute came after referee Bobby Madden awarded a foul for a challenge on him by Staggies' stopper Scott Boyd.

Mulgrew got a head to Stokes's free-kick and it took a deflection before landing at the feet of the Swedish striker who swept the ball in from close range.

Guidetti, on loan from Manchester City, was involved in the visitors' second goal three minutes later when he ran on to a Stefan Johansen pass and cut the ball back for the unmarked McGregor to steer past County keeper Mark Brown.

It was all too easy for the Parkhead men.

Left-back Graham Carey's free-kick forced Hoops keeper Craig Gordon to punch clear but it was hardly a rousing response from the beleaguered home side.

In the 26th minute Guidetti fired wide of the far post from an angle but on the half-hour mark Stokes was more accurate with his curling effort from the edge of the box, after taking a pass from Johansen, the ball evading Brown and nestled in the corner of the net.

Number four came in the 35th minute after Lustig's shot from a Johansen corner was blocked by Brown only to fall to Denayer who rifled it high into the net from close range.

The home side could only hope to avoid an avalanche as Celtic pressed relentlessly with Boyd's goal line clearance with seconds of the first-half remaining preventing Johansen making it five.

McIntyre had replaced Darren Barr with Michael Gardyne in the first-half and used his other two substitutes for the start of the second-half, Quinn replacing Boyd and Jake Jervis on for Yoann Arquin.

Deila had to make a substitution of his own in the 52nd minute after left-back Emilio Izaguirre was carried off on a stretcher after a challenge by Gardyne, to be replaced by Adam Matthews.

Four minutes later, the unchallenged Stokes fired in number five from 20 yards via the post which took County into embarrassing territory.

As Celtic understandably dropped the tempo, Gardyne sent a shot from 20 yards crashing off the post.

At the other end, in the 78th minute, Brown saved from McGregor after the Hoops midfielder ran clear on goal, before Stefan Scepovic, on for Guidetti, sent his drive inches wide of the post.

County, however, had suffered enough and the visitors eased up as they cruised to the final whistle. 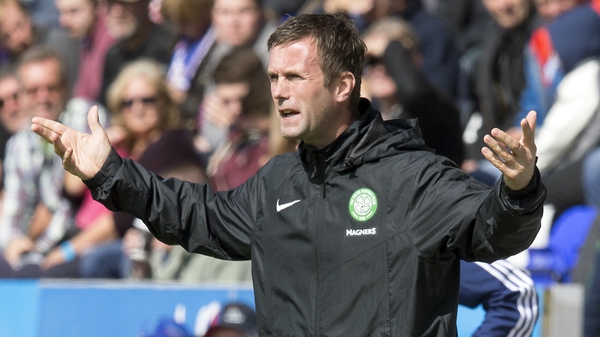