Serbia and Albania will be charged by UEFA later on Wednesday, according to sources, following the politically motivated brawl which caused Tuesday's Euro 2016 qualifier in Belgrade to be abandoned.

Scuffles between players erupted after a small unmanned drone trailed a pro-Albania banner over the the Partizan Stadium pitch and the flag was hauled down by Serbia defender Stefan Mitrovic.

The Group I encounter, which went ahead despite long-standing political tensions between the two nations, then became a melee involving players from both teams.

English referee Martin Atkinson led the teams off the field as disruption in the stands threatened to boil over, with objects being thrown onto the pitch at Albanian players.

The Frenchman said in a statement: "Football is supposed to bring people together and our game should not be mixed with politics of any kind. The scenes in Belgrade last night were inexcusable." 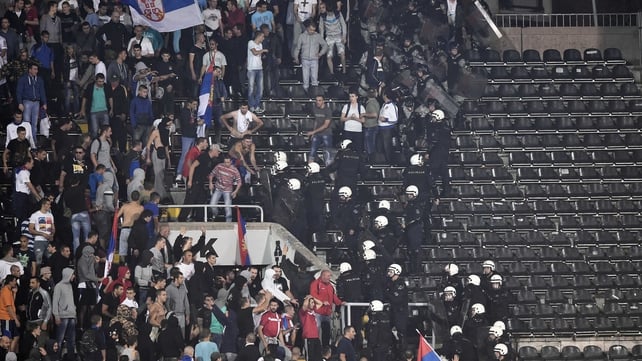 Tensions have never been far from the surface between the nations over Kosovo, the province with which both countries share a disputed border and is recognised as independent by the United States and major European Union countries but not by Serbia - a bone of contention with Albania.

The tie was goalless at the time of the suspension and clear-cut chances were in short supply in the Serbian capital.

Zoran Tosic and Branislav Ivanovic both missed the target from the edge of the area as the hosts attempted to force the issue while Dusan Tadic's long-distance effort was well blocked by Albania defender Andi Lila.

The best chance of the game fell to the visitors as an Ansi Agolli free-kick from the left wing found Mergim Mavraj, whose shot from inside the area was tipped wide by Serbia goalkeeper Vladimir Stojkovic.

From the following corner, Lorik Cana's header at the far post sailed wide, while the visitors were appearing to gain the upper hand before the controversy erupted.

Olsi Rama, brother of Albanian Prime Minister Edi Rama, was arrested on suspicion of organising the incident that provoked the abandonment of the Euro 2016 qualifer, according to Serbian State Television (RTS).

His arrest comes just over a week before the official visit of his brother to Serbia, the first such visit in 68 years.

According to RTS, who cited the Serbian Interior Ministry, Olsi Rama was directing the drone that landed on the pitch taped in a flag displaying the colours of 'Greater Albania' from the official executive box at the stadium, from which ordinary Albanian supporters had been barred by the Serbian Federation on Sunday.

The drone and the flag prompted havoc among both the Serbian players and some of the 20,000 spectators, with fans hurling smoke bombs and trying to attack the Albanian players on the pitch just four minutes from the half-time whistle.

FIFA president Sepp Blatter added his condemnation of the events.

He stated: "Football should never be used for political messages. I strongly condemn what happened in Belgrade last night."