John O'Shea celebrated his 100th cap for Ireland with a fantastic late equaliser as Ireland secured a 1-1 Euro 2016 qualifier draw with Germany in Gelsenkirchen.

Germany were in control throughout the game and looked to have taken the three points when Toni Kroos scored in the 71st minute.

But O'Shea's goal in the fourth minute of injury time, the last kick of the game, earned Ireland a famous draw.

After the game O'Shea told RTÉ Sport it had been a "fairytale ending".

That Ireland were still in the game by the time O'Shea made his vital contribution was due in large part to the efforts of goalkeeper David Forde, who produced a string of second-half saves, and some typically stubborn defending from O'Shea and his colleagues.

Germany ran out determined to atone for their 2-0 defeat in Poland at the weekend - their first in 34 qualifiers - but they endured a frustrating evening once again despite dominating possession.

Joachim Loew's men have taken just four of the nine points the have contested to date, while Ireland's haul now stands at an impressive seven.

As a result, they will head into next month's visit to Scotland brimming with confidence and with their hopes of qualification very much alive.

Manager Martin O'Neill was quick to dismiss talk of a German crisis in the run-up to the game, but his team added to opposite number Loew's frustration with a pugnacious first-half display which saw the visitors head for the dressing room still on level terms and with Forde mercifully untested.

He had sprung something of a surprise, not so much in the identities of the personnel he employed, but in the roles he asked at least two of them to perform with striker Jon Walters once again lining up on the right side of midfield and  Aiden McGeady playing in the hole behind lone striker Robbie Keane.

It was a system designed both to protect makeshift right-back David Meyler and provide some support to Keane, and while the latter aspect was less evident, the defensive solidity O'Neill required was there in abundance.

The manager had admitted in advance that best-laid plans could be torn up within five minutes, and he was very nearly correct.

Had Durm's piledriver, which came in the sixth, rather than fifth minute, flown under the crossbar rather than crashed into it, Ireland might have faced a very different prospect.

That it did not helped to preserve belief and while Germany, prompted by the gifted Kroos, who repeatedly picked out Muller, Karim Bellarabi and Goetze with a series of instinctive passes, enjoyed long periods of possession, they rarely threatened to make it count.

Defender Antonio Rudiger headed wide after Muller had turned Kroos' 14th-minute free-kick back across goal, and Bellarabi could not hit the target from distance after Forde had compounded Marc Wilson's earlier error with a heavy touch.

But it was not until first-half stoppage time that the Millwall keeper was called upon in earnest, repelling Julian Draxler's shot at his near post after central defender Hummels and Muller had combined to play him in. 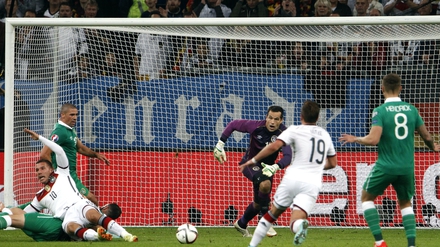 Lukas Podolski replaced Matthias Ginter at the break and very nearly handed the visitors a 49th-minute advantage when Keane picked off his pass and fed McGeady, whose initial shot was blocked before Neuer prevented Keane from connecting with McClean's follow-up cross.

But the escape simply seemed to spur Germany to greater heights with Forde palming away a deflected Podolski effort and blocking Bellarabi's shot from an acute angle and then acrobatically tipping Kroos' dipping attempt over the bar in quick succession.

It was McClean who came to the rescue with 56 minutes gone when he did just enough to prevent Muller from converting Hummels' flick-on in front of goal with Ireland firmly under the cosh.

Podolski was convinced he should have been awarded a penalty for Wilson's challenge two minutes later, but Slovenian referee Damir Skomina was not, and he was equally unimpressed when Goetze was muscled off the ball by O'Shea with 69th minutes gone.

However, the stadium erupted two minutes later when Kroos made space for himself on the edge of the box and unleashed a right-foot drive which screamed past the diving Forde and went in off the foot of the post.

Hoolahan might have snatched a point but for Durm, but there was nobody on hand to deny O'Shea, whose contribution sparked mass celebrations on the pitch, the sidelines and in the stands.