Derry City manager Peter Hutton hailed his team's "character" and "resilience" after they fought back against Shamrock Rovers to earn a 1-1 draw and replay in the FAI Cup semi-final.

Speaking to RTÉ Sport, he said: “It’s about hanging in there and being resilient, so I think it was a good result for us."

Rory Patterson equalised on 87 minutes but Hotton also noted that the Candystripes had a golden chance to win the game in injury time but were thwarted by Rovers 'keeper Barry Murphy.

“We could have snatched it right at the death," added Hutton. "The 'keeper pulled off a great save from young Michael Duffy.

“We changed it slightly [after going behind]. We went three at the back and pushed Barry Molloy back into the middle, which freed up Philip Lowry to get more advanced.

“We dominated possession a bit after that, which showed good character from the players.

“They were very resilient, they didn’t give up.”

“In the first half we missed one or two chances, and you start to think it’s not going to be your day but you have to just keep at it.

Hutton didn't dwell on the short turnaround for Tuesday's replay in Derry and said home advantage will be a boost after travelling to Tallaght for the drawn game.

“We just have to get on with it," he said. "We’ll assess everyone tomorrow and hopefully they get a good recovery and come through.”

“It’ll be great. Hopefully the crowds will come out, the Brandywell will be rocking and they’ll lend their vocal support to the boys.

Rovers boss Pat Fenlon was more concerned about his team letting their lead slip than the 48-hour recovery period.

Also Speaking to RTÉ, he said: “It’s a quick turnaround for both teams," he said. "We’ll probably travel on match-day. We’ll get the lads recovered this evening and then back in tomorrow at some stage.”

“We should have hung on and won the game to be fair. I thought, second half, we deserved to.

“We didn’t give away too many chances in the second half. We played a lot of the game in their half but you have to give credit to them, they kept going as well.

Fenlon expressed frustration that Patterson's equaliser had come from a corner, saying Rovers needed to show more "desire" in defence.

“We’re disappointed to concede a goal off a set-piece again," he said. "We’ve done plenty of work on it. It’s about desire, stopping the people you’re marking scoring goals, and that’s what we’ve got to get into them." 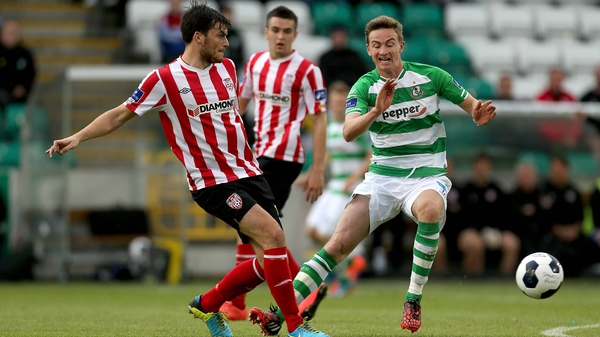