Arsenal manager Arsene Wenger shoved Jose Mourinho as their long-running feud turned physical in a win which saw Chelsea take a five-point lead at the top of the Premier League.

Wenger refused to take a backwards step in the 20th minute after leaving his technical area following Gary Cahill's tackle from behind on Alexis Sanchez.

Mourinho told the Frenchman to "back off" as their rivalry endured another ugly episode, with the Gunners boss firmly planting two hands on the Portuguese's chest - risking Football Association disciplinary action - and the pair also eye-balling each other in close quarters.

Sanchez had earlier clattered Thibaut Courtois in the head in challenging for the ball, with the goalkeeper playing on for a short time before departing the stadium for precautionary tests.

Petr Cech was on the field when Chelsea took the lead through an Eden Hazard penalty awarded after the Belgian slalomed through two challenges before being felled by Laurent Koscielny as the Arsenal defence failed to follow Wenger's combative example.

Calum Chambers might have been sent off for two bookable offences in the first half and Wojciech Szczesny made a fine save to prevent Mathieu Flamini from turning the ball into his own net as Arsenal survived two scares in a feisty contest.

Cesc Fabregas might have conceded a penalty for handball before the former Arsenal captain played a beautifully flighted pass to allow Diego Costa to net his ninth Premier League goal of the season.

Asked afterwards if the victory had been sweeter given the negativity aimed towards him by some Arsenal supporters, the Spain international told Sky Sports 1: "Not at all. I have huge respect for Arsenal - they gave me everything when I was little. Without them I wouldn't be here and I wouldn't have won what I have won.

"I take it in a positive way. I know they love me and it is all because we were together once." - Cesc Fabregas

"I have huge respect and I take it in a positive way. I know they love me and it is all because we were together once.

"Sometimes, circumstances mean these things can happen. But I have always said it - I am not scared. They will always be in my heart forever.

"But this is football, I am in this fantastic football club now playing with great players, a great coach and great fans and I want to win everything.

"I am hungry and really want to do well for this club. I hope I can make it in the future."

Although Arsenal showed more steel than in March's 6-0 capitulation in Wenger's 1,000th match in charge, it means the Frenchman is still to taste victory over a Chelsea side managed by Mourinho after 12 attempts.

Mourinho on Friday refused to apologise for in February labelling Wenger "a specialist in failure" and their latest contretemps will have soured the relationship further.

The Chelsea boss will barely care as his side took a commanding advantage over second-placed Manchester City into the international break after dropping just two points in the opening seven games. 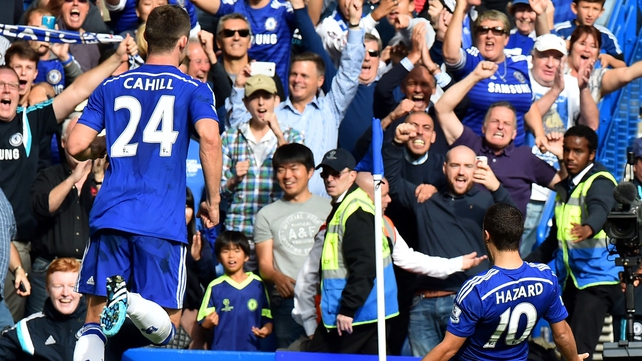 There was a 15-minute delay to the scheduled 2.05pm kick-off between the two remaining unbeaten teams in the top flight after a flare was lit on the approach to the visiting end.

The major flashpoint of the match occurred when Cahill slid in recklessly on Sanchez to the left of the Chelsea dugout.

Wenger, this week celebrating his 18th anniversary at the Arsenal helm, strode towards the incident, walking across the Chelsea technical area as he made his objections.

Mourinho reminded his adversary he was in his territory, telling the Frenchman to retreat to his own designated space, only for the Gunners boss to object and place his hands on Mourinho's chest.

Fourth official Jonathan Moss intervened not once but twice, the second time after the managers had exchanged views almost nose to nose.

Moss explained the events to referee Martin Atkinson, who had booked Cahill, and then left the managers in no doubt that their behaviour would not be tolerated.

There was further cause for alarm on the touchline when Courtois required attention after his head had been caught as Sanchez chased a Jack Wilshere through ball.

The Belgium goalkeeper played on before needing further treatment, with Mourinho encroaching on to the field to alert Atkinson.

Cech came on, determined to seize his chance after being relegated to the substitutes' bench this term following a decade in the first team.

It was Cech's 480th Chelsea appearance, just his second as a replacement.

Hazard was the catalyst for the on-field action igniting when he burst past Santi Cazorla and Chambers and into the area.

Koscielny stuck out a leg and tripped Hazard, who tucked in the penalty himself.

The visitors were fortunate not to have Chambers sent off for two bookable offences before the interval.

Chambers had tripped Hazard to earn his yellow card and he then hauled down Andre Schurrle on the edge of the area, but avoided further sanction.

Cazorla flashed a shot wide from Sanchez's pass as Arsenal failed to test Cech early in the second half before Szczesny twice mis-hit clearances and was relieved to see the first bounce to a man in red off Costa.

Szczesny's reflexes saved Arsenal after Hazard beat Chambers and crossed. Flamini turned the ball towards his own goal, with Szczesny palming the ball on to the post.

Wilshere's pleas for a handball against Fabregas were rejected and Chambers blasted over as Arsenal tried to find an equaliser, with Chelsea playing largely on the counter-attack.

Costa teed-up Hazard, who clipped the ball over, but the Blues had their second when Fabregas lifted his pass over the Arsenal defence for the Spain striker to run on to it.

Costa, playing his third game in nine days despite his fragile hamstrings, won the race for the ball and flicked it over the on-rushing Szczesny to seal victory.

There was still time for Danny Welbeck to be booked for a reckless foul on Fabregas and Costa's blushes to be spared by the offside flag as he missed an open goal in a comfortable Chelsea win. 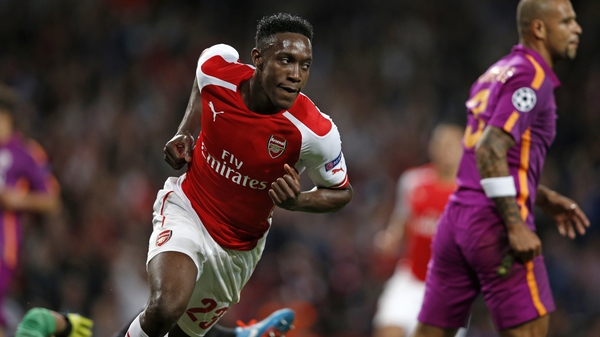