Relegation-threatened UCD failed to capitalise on Athlone Town's defeat to Limerick on Friday, as they were easily beaten by a dominant Sligo Rovers in the SSE Airtricity League Premier Division at the Showgrounds on Saturday night.

A first half strike from Eamon Zayed was followed by a second half goal from Gary Armstrong on his first senior start, while Paul O'Conor and Danny Ledwith goals added some well-deserved gloss to Gavin Dykes' first win as interim boss.

Aaron Callaghan's side continue to sit just a single point above basement side Athlone, following a game in which Rovers enjoyed almost complete control.

An injury-ravaged Sligo side were without a host of first team players and were forced to hand a first start to 18-year-old Gary Armstrong, grandson of Rovers' all time top scorer Johnny.

The young winger showed his keen eye for goal inside the first minute but he was unfortunate to see his bending shot clip the outside of Conor O'Donnell's far post.

Former UCD man O'Conor skied his effort from the edge of the area on seven minutes having been teed up by Danny North, while team-mate David Cawley did likewise moments later.

O'Donnell did well to fall at the feet of the oncoming Raffaele Cretaro before clearing the ball to safety on the ten minute mark, after he was sent through on goal by a superb ball from Cawley.

It took 15 minutes for the Dubliners to produce their first chance. Samir Belhout given plenty of time to shoot at the edge of the area, but he couldn't control his effort as it soared over Richard Brush's crossbar.

Rovers' Zayed nodded wide from a well hit Gary Boylan cross, while North and Zayed both combined to set up Cretaro on 33 minutes. The winger skipped by the challenge of Gareth Matthews, but couldn't beat O'Donnell who dived low down to his left to claim the ball.

Rovers did, however, take the lead two minutes later. Armstrong robbed the ball in the centre of the field before threading it through to Cretaro. The winger found Zayed in turn who side-footed first time past the stationary O'Donnell to net his fourth league goal for the Bit O'Red.

O'Donnell did well to palm North's vicious drive above his crossbar on 38 minutes, while Armstrong dragged his shot narrowly wide three minutes from half-time after North picked him out at the edge of the six-yard box.

Rovers sucker-punched UCD with a quick-fire double on 51 and 54 minutes.

First, Armstrong doubled Sligo's lead after Cretaro recycled Ledwith's miss-hit cross from the left before the ball landed at the feet of Zayed.

The Libyan international's strike was deflected away by a UCD body, but for the ball to land at the feet of Armstrong. The youngster took one touch before firing past O'Donnell for his first goal for his home town club.

Aaron Callaghan's side had only just re-started when Zayed found O'Conor in a dangerous position inside the UCD area. The midfielder acrobatically volleying the ball beyond the helpless O'Donnell for his fourth league goal of 2014..

Robbie Creevy almost grabbed an opener for UCD, but Brush was equal to his headed effort.

North and Cretaro were both denied by a busy O'Donnell just after the hour-mark respectively, while UCD's Belhout missed the target from 20 yards on 70 minutes.

Rovers compounded the away side's misery six minutes later as their rearguard allowed Ledwith's free kick from the wing sneak to past and O'Donnell was left stranded as the ball sailed into the far corner to make it 4-0. 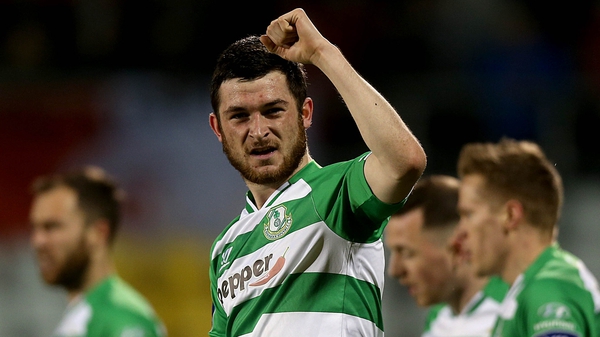 Rovers too strong for lowly UCD