The name Shamrock Rovers might be synonymous with the FAI Cup but there is a whole generation of Rovers fans who have never seen the famous trophy hoisted by a Hoops captain.

The Dublin club have won the trophy a record 24 times, yet the last time it was spotted in the Shamrock Rovers trophy cabinet was 27 years ago.

The Hoops have come close on three occasions since that glorious afternoon at Dalymount Park in 1987 when goals from Harry Kenny, Noel Larkin and Mick Byrne secured a 3-0 victory over Dundalk before Pat Byrne raised the Cup for Rovers in what was the end of an era in many different ways for the club.

The 2013 campaign saw Rovers reach this semi-final stage but their hopes were dashed when a below-par performance saw them crash out of the tournament at The Showgrounds to eventual Cup winners Sligo Rovers.

And Shamrock Rovers ace midfielder Ronan Finn is hoping that Pat Fenlon’s Hoops learned from that disappointing result and performance as they plan for Sunday’s FAI Ford Cup semi-final against Derry City at Tallaght Stadium.

Speaking to RTÉ Sport, Finn said: “The mood is great. Everyone is looking forward to the game on Sunday, so hopefully we can go and get a positive result.

“We never showed up (last year) and Sligo were the better side, so as a player you learn from that. A lot of the boys have experienced disappointment in their career so it is something that you have to channel to make sure it doesn't happen again.

“But Sunday’s a different game. There are a lot of new faces in the club and we’re under new management and we believe in ourselves. Pat’s got the belief in us and hopefully we can prove that on Sunday.” 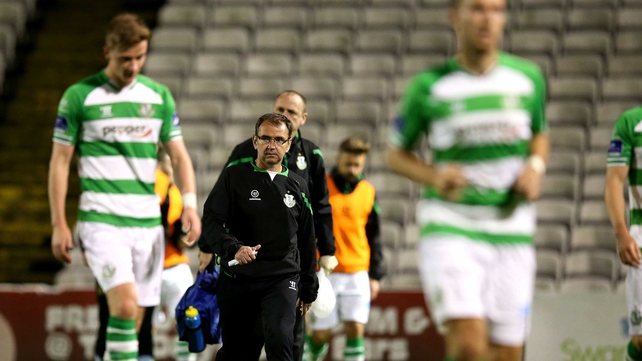 As well as new faces, the manager has also changed since last season’s Cup exit and Finn believes that Fenlon is the right man for the job and he has brought a new belief to the club.

Finn said: “As a player you want medals and you want big nights like the Aviva so hopefully Pat can do that for us. He has come in and has put a stamp on things and I think we have reacted quite well to everything that he has told us.

“Pat has been around the league, he knows it inside out. We have learned from him already. He’s a top-class manager. He has experience winning leagues and winning cups so he is only going to benefit us as players."

And while the Rovers squad are already looking like a more cohesive, hard-working unit since the arrival of the former Hibernian, Shelbourne and Bohemians manager, Finn also praises the boss for taking his own game to a new level.

“He has taught me areas of my game that needed to be looked at,” admitted the midfielder. “I find I work harder; he really brought that into my game.

“And he has got that work-like mentality, and has that drilled into the squad no matter what position you are, up front, left back, right back, you work hard and that’s the base.

“He has got everybody working like that and it is the least that he demands. The lads know that they have to perform because there is a squad there and he’s going to use it.

“And it’s great that the manager shows belief in the whole team and the lads know that they will get a chance.

“As players, you want to be pushing for a starting position and Pat has given that belief in everybody and that’s something that’s very important to a player. If you have the manager’s belief in you, that’s enough to keep you going.”

Finn knows that a very tough encounter with Derry City still has to be negotiated before Rovers can start thinking about Aviva glory.

But he feels that the Hoops have been a better side than their northern counterparts so far this season.

“But they’ll also want to get to the Aviva so it should be a good open and entertaining game but hopefully we can get a positive result.

"Strategically we have to play a sensible game and not give away any soft goals. We have to be professional and do everything in the right way and just make sure we get into the final.”

Cup success will also bring European football back to Tallaght Stadium as Rovers have suffered a longer-than expected Europa League group stages hangover, missing out on qualification over the past two seasons.

Finn admitted that that was a short-term goal of the new manager as he arrived at the club with the league title almost out of his reach when he took over the role in August.

“This is something Pat earmarked,” said Finn. “Because a club like Rovers needs to be playing European football every year, but that only comes from deserving to be there.

“In the last couple of years, we obviously didn't deserve to be there because the league table doesn't lie.

“As players, we have let ourselves down and the club down so now we have a chance to rectify this on Sunday and make sure that come cup final day, that if we are there, we get the job done.”