Ronny Deila is confident that the 1-0 Europa League win over Dinamo Zagreb at Parkhead last night has set Celtic on course for qualification to the knockout stages.

The Hoops boss targeted ten points from the Group D fixtures and the three garnered from Kris Commons' sixth minute strike against the Croatian side were gratefully added to the one gained in the 2-2 draw in Salzburg in the opening fixture.

The Scottish champions lead the section along with Salzburg, who beat Romanian side Astra 2-1, with Dinamo in third place with three points.

With back-to-back games against Astra coming up - with the first match at home later in the month - Deila believes two victories would almost certainly guarantee qualification.

He explained: "We would have a very good chance. The average points needed by teams in the last three years to go through is 9.8.

"It looks like three teams are equal and it is going to be a fight to the end.

"I don't feel relief. I am happy to win but there is an anger inside, to play better.

"That's what I talk about all the time. But we are in a process and some players, especially in the midfield, haven't played so many matches - but they worked so hard and I am proud of them."

Once again, though, the Norwegian had goalkeeper Craig Gordon to thank for the win, which he did in the dressing room after the game.

"Craig was unbelievable. I said to him in the dressing room that we have to thank him for conceding zero goals and winning the game" - Ronny Deila on Craig Gordon's performance

As he had done against Salzburg in Austria, the 31-year-old Scotland international, signed as a free agent in the summer, came to the rescue at crucial times for the Hoops.

Deila said: "Craig was unbelievable. I said to him in the dressing room that we have to thank him for conceding zero goals and winning the game.

"He can't do much better than he has shown. He can work on his kicking but he is a fantastic keeper and very calm."

Zagreb coach Zoran Mamic left Glasgow certain that his side deserved a least a point from the game.

"I'm very disappointed," he said. "When you see the 90 minutes, we were the better team.

"But football is about goals and we didn't score, so I have to say congratulations to Celtic." 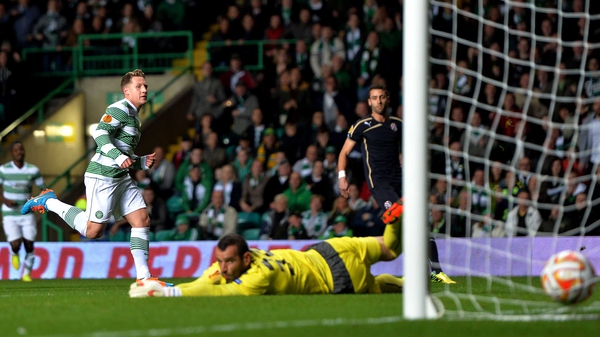