Danny Welbeck plundered a hat-trick as Arsenal got their Champions League campaign up and running with a 4-1 victory over Galatasaray at the Emirates Stadium, where play was halted in the first half after the Turkish away supporters threw flares onto the pitch.

With England boss Roy Hodgson watching from the stands, Welbeck, the £16million deadline day signing from Manchester United, produced a clinical display to put the Gunners back on course for qualification from Group D and mark manager Arsene Wenger's 18th anniversary in style.

However, governing body UEFA are likely to launch an investigation into the unsavoury scenes 20 minutes into the match which saw play halted after several flares were jettisoned from the away end, with Galatasaray goalkeeper Fernando Muslera and captain Wesley Sneijder helping restore calm as riot police surrounded the perimeter fences.

After a positive start and then surviving a couple of dangerous counter-attacks, Arsenal swept into the lead on 22 minutes when Welbeck converted a inch-perfect pass from Alexis Sanchez.

Welbeck doubled Arsenal's lead on the half hour with another neat finish, this time latching onto a back header before running clear to beat the keeper.

Galatasaray fans then let off several flares and threw them onto the pitch which saw the game halted for several minutes, and could lead to disciplinary action from UEFA once all of the reports are gathered.

Sanchez - who had earlier been felled by a two-footed lunge from defender Felipe Melo, which was only punished by a yellow card - slid home a third goal just before the break.

Welbeck completed his hat-trick on 52 minutes, before Arsenal were reduced to 10 men when goalkeeper Wojciech Szczesny pole axed Burak Yilmaz, who converted the resulting penalty.

Colombian David Ospina made a couple of smart saves during the closing stages, as Arsenal will now head to Barclays Premier League leaders Chelsea on Sunday in confident mood. 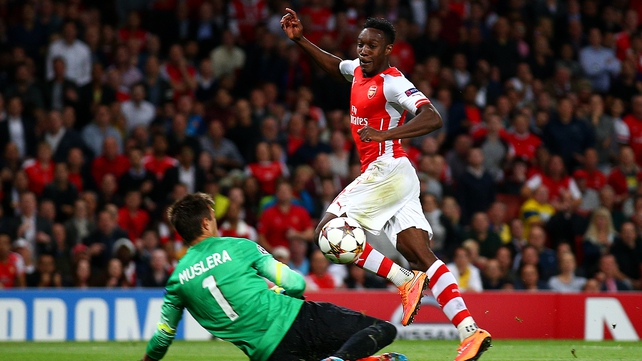 The Galatasaray fans had let off flares in streets around Ashburton Grove before the match and thrown some into the nearby Tollington Arms pub, for which Police made arrests.

The Turks continued their ferocious support inside the Emirates Stadium right up to and past kick-off, but it was Arsenal who made a bright start.

With Sanchez and club-record signing Mesut Ozil interchanging down the left, backed up by the quick feet of Santi Cazorla and Alex Oxlade-Chamberlain marauding down the other flank at every opportunity, the Gunners showed plenty of attacking intent to support Welbeck.

Galatasaray, though, were also dangerous on the counter, with a curling shot from Telles Alex spinning wide of the far post.

Arsenal, so poor in their opening Group D game away to Borussia Dortmund, finally found a decisive pass as they swept into the lead on 22 minutes.

Kieran Gibbs - another of several Arsenal players being watched by Hodgson in the stands - fed Sanchez on the left.

The Chile international strode forwards, cut inside and then played a slide-rule pass through into the path of Welbeck, who held off Melo to guide the ball under Muslera.

England forward Welbeck almost skipped into the six-yard box, this time down the right, but was thwarted by a last-ditch tackle by Sneijder.

Aurelien Chedjou sent an attempted clearance header back towards goal, which Welbeck was onto in a flash, nodding it clear of Melo before sprinting to the edge of the penalty area, from where he coolly dispatched a low shot into the bottom right corner.

Welbeck could have chalked up a hat-trick when he side footed the ball straight at the keeper.

At the other end, Goran Pandev then did the same, with Szczesny gathering the 12-yard bobbling shot.

Galatasaray defender Melo should then have been shown a red card for a reckless two-footed lung on Sanchez, which left him stricken on the far touchline, but Italian referee Gianluca Rocchi showed only a yellow card.

The match was stopped for several minutes after Galatasaray fans threw flares onto the pitch from the far corner behind Muslera's goal, which the keeper went over to kick from the pitch before trying to calm the atmosphere as riot Police moved around the Clock End.

The Galatasaray fans were, however, left in stunned silence after the start as Sanchez swept in a third goal.

The Chilean, a £32million summer signing from Barcelona, showed no ill effects of Melo's brutal challenge as he collected Ozil's pass which split the defence to slot in his fifth goal of the season on 41 minutes.

Arsenal continued where they had left off following the restart.

It was a neat through ball from the England midfielder which released Welbeck for his hat-trick on 53 minutes, the striker clipping his shot over the keeper before taking in the adulation of the North Bank.

Arsenal had to play out the final 30 minutes with only ten men after Szczesny upended Yilmaz as the Turkish forward beat the offside trap to dart onto a through ball.

The referee immediately pointed to the spot, and brandished a red card.

Sanchez was the player substituted as Ospina, signed from Lille in the summer, came on, but the Colombian goalkeeper was sent the wrong way by Yilmaz.

Ospina later made a fine save from Yilmaz's close-range header, clawing the ball away from under the crossbar and also denied Hamit Altintop as well as Sneijder.

In stoppage time, Cazorla's chip was cleared in front of the line by Semih Kaya.