Celtic striker Anthony Stokes says he is happy to play anywhere to fit into manager Ronny Deila's plans - and feels he is working harder to stay in the team.

The forward has made nine starts and come off the bench twice this season under Deila but has found himself playing wide on the left in recent games.

With Stefan Scepovic and John Guidetti coming in at the beginning of the month, Stokes knows there is added competition up front, and he believes he is responding in the right manner.

The Republic of Ireland international said: "I have realised this year that I have to work very hard and keep my form up to stay in the team. We have a lot of competition for places, especially in the striking department.

"I've had to adapt slightly in the last two games when I have played on the left but I am enjoying it. I don't mind playing out wide or through the middle. Once I get myself in the team, that's my main focus.

"Against St Mirren, I felt I played okay in the first half but in the second half, I wasn't great in possession of the ball. But against Hearts, I felt I played well on the left and (Emilio) Izaguirre and I linked up well.

"It was a more workmanlike performance from the whole team against St Mirren as there was a bit of fatigue there but we got the job done and got the three points."

"It's European football, a very high level, and we want to make an impact this year"

Stokes has scored twice this season but does not feel he will be judged on his strike rate alone.

"Maybe not so much with the gaffer because he looks a lot more into the performance of the team," the 26-year-old said.

"I have tried to up my work-rate a bit and adapt my game to how he wants to play."

Guidetti has scored three goals in his first three starts and Stokes is enjoying playing with the on-loan Manchester City forward.

Stokes, whose reverse pass set up the Swede for the winner at St Mirren Park on Saturday, said: "He's a very intelligent player. He makes great runs off the ball. He's a good all-round striker and has a bit of everything.

"I have enjoyed being around him, even in training. He's a good lively lad and he's bit of a character so he's added a lot to the squad already."

Guidetti is unavailable for Celtic's Europa League clash against Dinamo Zagreb tonight (8.05pm) and Stokes is determined to ensure the absence is not felt.

Celtic drew 2-2 in Salzburg in their first group game and Stokes is eager to embark on a run that will help them atone for their failure to make the Champions League.

"It's European football, a very high level, and we want to make an impact this year," the former Hibernian striker said.

"Our home games are going to be massive so we will be looking for a win." 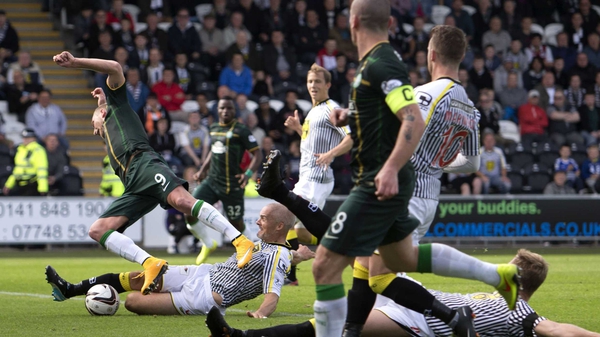