He is the leading scorer across the top four divisions in England but Eoin Doyle admits he has a long way to go before getting into the Republic of Ireland frame.

The former Hibernian, Sligo Rovers and Shamrock Rovers striker has hit 11 League One goals for Chesterfield already this season, and Martin O'Neill said last week that he will monitor the player when asked at a press conference to name his latest squad.

However, with a long list of proven Premier League and Championship forwards – Robbie Keane, Shane Long, Daryl Murphy, Jon Walters, Kevin Doyle, Anthony Stokes, Simon Cox and Conor Sammon – ahead of him, Doyle concedes he must progress further before he earns a call-up

“I think everyone wants to play for their country. Of course [it’s an ambition], I’ve always dreamed of it,” he told RTÉ Sport.

“At the minute, there’s a lot of established strikers from our country, they’re playing at a higher level than me and doing well.

“I’d obviously have to get there first before I’d come into the frame.”

Asked about his own form – he has scored 12 goals in total, including two hat-tricks – Doyle says he has benefited from a more settled role in the side.

“It’s been a good season for the club in general,” said the 26-year-old Dubliner.

“The goal tally has been good so far and I’m enjoying it. The gaffer [former Sligo boss Paul Cook] has trusted me a bit more this season to be a striker.

"Before I kind of shifted into different positions and played around but I think staying up there for longer periods benefits me a bit more.” 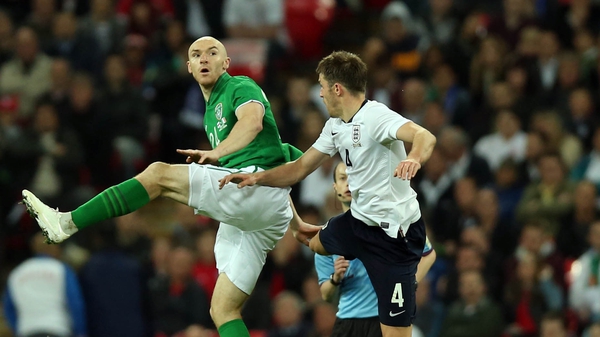