The pressure on Newcastle manager Alan Pardew cranked up as his side were beaten 1-0 by Stoke at a rain-drenched Britannia Stadium.

Ahead of this match Magpies owner Mike Ashley - who the club insist was joking with the comment - said Pardew would be "finished" if it ended in defeat.

And, certainly, it will be interesting to see what the future now holds for Pardew after a performance from the Tyneside outfit that hardly supported the case for him to keep his job, and was watched by Ashley from the stands.

Newcastle - several of whose fans held up 'Sack Pardew' signs throughout the contest - were slow to react at the back as Peter Crouch headed in from the lively Victor Moses' cross in the 15th minute.

And while there were other moments of defensive uncertainty from the visitors, they rarely looked like finding an equaliser, with Potters goalkeeper Asmir Begovic only really being called upon to make one decent save, keeping out Daryl Janmaat.

Jack Colback came close to levelling late on, but struck the bar from close range.

Stoke might have had a penalty in the first half when Yoan Gouffran bundled over Moses, and substitute Marko Arnautovic then hit the post early in the second half.

Overall, Mark Hughes' team were value for what were their first points at home in the Barclays Premier League this season and takes them from 17th up to 11th.

Newcastle, meanwhile, stay second-bottom and without a league victory this term. They have won only once in 14 top-flight games stretching back to 2013/14, with 10 of those being losses, and Pardew must be wondering if his time is up. 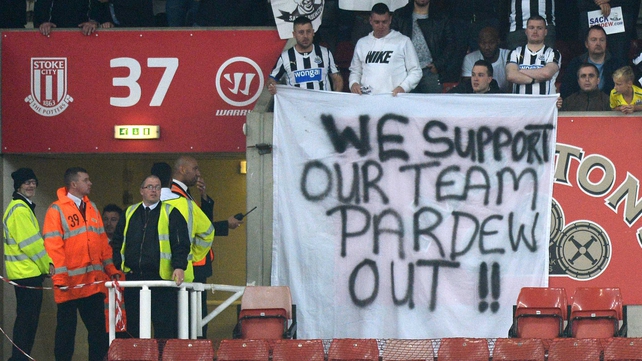 After a scrappy opening to the game in which Steven Nzonzi and then Emmanuel Riviere struck off-target, one of several moments of quality from Moses - and some hesitant Newcastle defending - led to the deadlock being broken.

The on-loan Chelsea winger got the better of Janmaat on the left flank and sent in a delivery that Crouch, outjumping Magpies skipper Fabricio Coloccini, crashed into the net.

As the lofty frontman wheeled away in delight, cries - seemingly from fans of both clubs - of "you're getting sacked in the morning" rang out around the stadium and Pardew looked very worried indeed.

Coloccini fired over the Stoke bar moments later, while a loud clap of thunder breaking out over the ground only added to the sense of gloom surrounding his sodden manager.

The Potters were soon threatening again, with Moses latching on to a Mame Biram Diouf ball and going to ground in the area under a challenge from Gouffran.

Despite Stoke protests, referee Craig Pawson did not award a penalty and as play continued, Moussa Sissoko rifled an effort wide at the other end. Diouf - having injured himself as he played the pass to Moses - was withdrawn for Arnautovic.

Janmaat had a shot blocked by home captain Ryan Shawcross and Newcastle were then on the back foot again as Moses played in Crouch, who skewed his effort wide as Paul Dummett closed him down.

There was a further scare for the visitors when a Marc Muniesa cross came via Mike Williamson to Crouch, the resulting header being cleared by Coloccini.

Newcastle responded with a brief spell of pressure which saw Dummett's shot deflect over and Janmaat then drill one that Begovic - called into action more or less for the first time - pushed away at full stretch.

But Pardew's men looked vulnerable again just before the break as Moses cut through them once more and Arnautovic cracked the ball goalwards, with Dummett doing well to make the block.

Pardew looked to give fresh impetus to his attack by introducing Papiss Cisse for Riviere at the interval, but Newcastle were soon breathing another sigh of relief as the second half got under way as Arnautovic's strike came back off the post.

And some woeful attempts by the away side to clear just after the hour mark saw the ball ricochet through to Moses, whose close-range shot hit the legs of goalkeeper Tim Krul.

Stephen Ireland saw a shot go off-target, before Crouch penalty appeals for a tug on his shirt from Williamson turned down.

Newcastle, meanwhile, were in desperate need of of a saviour, and it looked like Colback might be the man in the 84th minute - but, when the ball dropped to him right in front of goal, he could only fire it against the frame and then hold his head in disbelief. 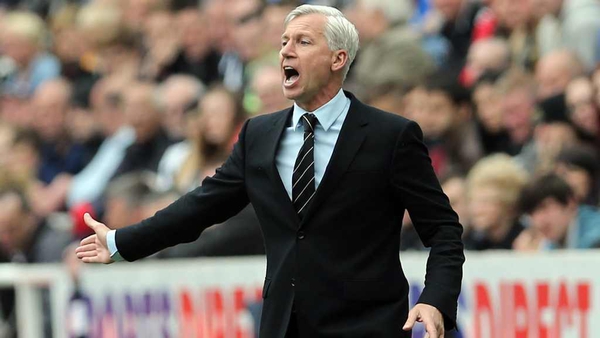