Wayne Rooney apologised to his Manchester United team-mates for his reckless kick on Stewart Downing and has no plans to appeal the red card which he admits he fully deserved.

Louis van Gaal's second win as Manchester United manager against West Ham on Saturday was overshadowed by Rooney's dismissal, which came in the second half of an ill-disciplined match at Old Trafford.

In an incident which was not seen by the officials at the time, Luke Shaw was allegedly headbutted off the ball by Diafra Sakho, who may now face retrospective punishment, and referee Lee Mason struggled to keep a lid on tensions at times in the second half.

The biggest decision the referee made came in the 59th minute when he sent off Rooney for cutting down West Ham midfielder Downing as he sprinted down field.

West Ham manager Sam Allardyce branded the foul "crazy and irresponsible" while Rooney had no complaints about his dismissal.

Rooney was glad United held on for a 2-1 win and after the final whistle the captain apologised to his players in the dressing room.

"Yeah, of course I did (apologise)," the striker said.

When asked whether he would appeal against his ban, the England skipper said: "No. I understand it (the punishment).

"I knew at the time that I misjudged it.

"It is a red card and I don't think it will benefit anyone to appeal against the decision.

"It was probably the right decision. I saw the West Ham player making a counter-attack and I tried to break-up the play, but I just misjudged it.

"I think everyone knew (I was in the wrong), so I am just grateful that the lads were able to hold on."

Rooney had a reputation as something of a hot head in his early years, but this was the first time he had been sent off for United in five and a half years.

The 28-year-old, whose red card came the day before the 10th anniversary of his United debut, is aware questions about his temperament will be raised again following the sixth red card of his career.

"At the end of the day, I was trying to break up the play" - Wayne Rooney

"I expect people to say that, but at the end of the day, I was trying to break up the play," he said.

"It was a dangerous situation in that they were trying to break on us and I have just misjudged it, simple as that, but I have no complaints."

When asked whether he felt the need to apologise to Downing, Rooney said: "No. I haven't absolutely volleyed the lad.

"I have tried to trip him up and, to be fair to him, he got further away from me and that is why my leg is straighter than it should have been.

"As he pushed the ball away, my leg has straightened out and that is obviously why the referee has deemed it as a red card."

Rooney had started the match in fine fashion, clipping the ball past Adrian from a Rafael cross to put United ahead.

Robin van Persie then doubled United's lead before Sakho headed in a goal for West Ham to put the home fans on edge. 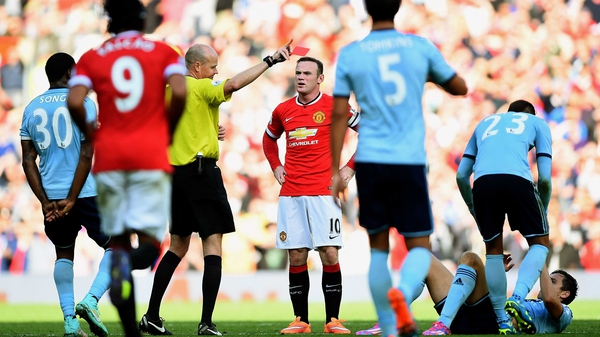