The striker pounced in each half after Craig Dawson opened the scoring to condemn the Clarets to their third defeat of the Premier League season.

Graham Dorrans then added a fourth with a minute left to underline the hosts' dominance.

The Baggies were always in control against lifeless Burnley, who failed to deal with live-wire Berahino.

The England Under-21 forward now has five goals for the season, with the Clarets having netted just once between them.

They have not scored in eight hours and 46 minutes in the Premier League and already look destined for a long fight against the drop.

The Baggies, though, clinched their third win in a week, following victories over Tottenham in the league and Hull in the Capital One Cup.

They were unchanged from their 1-0 win at Spurs last week, their first of the season under head coach Alan Irvine.

Berahino started after scoring the late winner in Wednesday's 3-2 cup victory over Hull, but Victor Anichebe and Brown Ideye were ruled out with hernia and ankle injuries respectively.

Burnley recalled Ross Wallace, Michael Kightly and Steven Reid, who left the Baggies in the summer after a four-year stay at The Hawthorns. Dave Jones and Dean Marney failed to recover from their thigh and hamstring injuries.

Burnley had not scored in the league in 436 minutes coming into the game and their lack of quality was evident from the start.

Kightly shot over for the Clarets before Chris Brunt's drive deflected off Michael Duff and dropped inches wide after 15 minutes.

Berahino drilled across goal as the hosts took charge and tried to add to their own measly goal tally of just one in the last 376 minutes of league football before the game.

And the opener came on 30 minutes to reward the Baggies for their more inventive play when Dawson headed in Chris Brunt's deep corner from five yards. 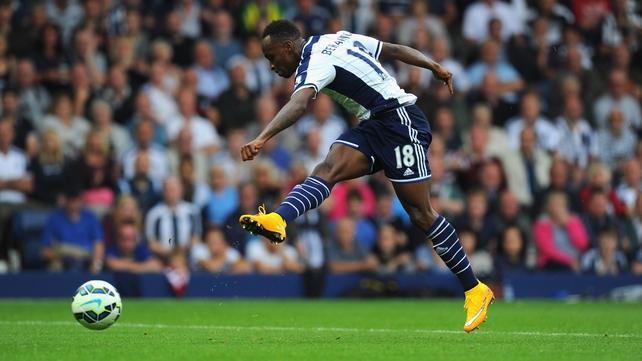 It was bitter for Burnley, who had three bids rejected for the defender - who also handed in a transfer request - in the summer.

Brunt then volleyed over four minutes before the break and Tom Heaton superbly turned Dorrans' fierce 25-yard drive behind.

Albion were hunting a second and it came in first-half injury time as Berahino netted his fourth of the season, nodding in from a yard out after Dorrans flicked on James Morrison's corner.

Burnley offered little resistance with the Baggies in total control, and they hauled off Wallace and Reid for Nathaniel Chalobah and Ashley Barnes at half-time.

Chalobah's first action was to pick up a yellow card for a foul on Dorrans and the changes made little difference.

Albion confirmed their dominance with a third on 56 minutes when Dorrans' pass split the Burnley defence for Berahino to drill low into the corner from 15 yards.

There was no way back for the visitors, although Ben Foster did well to keep out Lukas Jutkiewicz's header on 66 minutes.

Barnes ballooned over three minutes later as the Baggies switched off but there was little further danger.

And it was left to Dorrans to add the gloss with a minute left when he swept in from 14 yards. 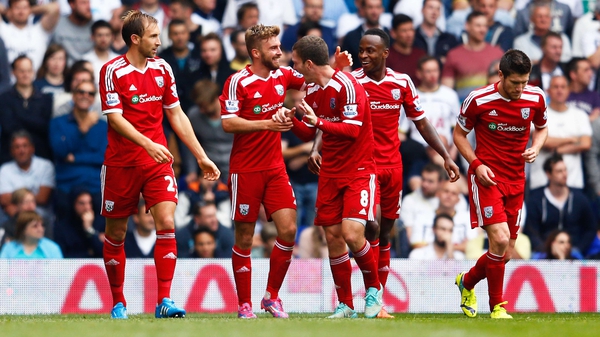