Papiss Cisse returned from injury in the nick of time to hand Newcastle manager Alan Pardew a lifeline with a double which denied Hull victory.

The Senegal international was introduced as a 69th-minute substitute on his return from a knee injury with the Magpies trailing 2-0 to superb strikes from Nikica Jelavic and Mohamed Diame and with Pardew firmly in the firing line.

Within five minutes, he had dragged them back into the game with his first goal since March, and he struck again with just three minutes remaining to claim a 2-2 draw which nevertheless leaves Pardew still waiting for a first Barclays Premier League win of the season.

Cisse belatedly gave Newcastle the cutting edge they had been missing before his introduction in a game they dominated for long periods, but failed to take by the scruff of the neck, and his intervention could hardly have been more timely, with the locals among a crowd of 49,199 turning after muted protests earlier in the game.

Fans arriving at St James' Park were provided with placards urging Mike Ashley to dismiss Pardew, although the owner had earlier indicated privately that there would be no knee-jerk reaction to the current situation.

Despite talk all week of concerted protests, the 53-year-old was initially booed only sporadically on his forays into the technical area.

Groups of supporters repeatedly tried to engage their counterparts in anti-Pardew - and Ashley - chants, but their efforts received lukewarm and fleeting support as most of the locals instead chose to roar on their team.

The response was concerted and although they headed back to the dressing room at half-time with the deadlock unbroken, they had enjoyed the better of the opening 45 minutes and created the clearer chances.

Unfortunately for Pardew, they were unable to convert any of them on an afternoon when the club's failure to find a replacement for Loic Remy during the summer transfer window was brought into sharp focus once again.

In the meantime, Remy Cabella, who found himself able to roam more freely with Cheick Tiote patrolling the area behind him, had toe-poked an effort straight at keeper Allan McGregor after running on to Moussa Sissoko's pass.

Yoan Gouffran headed straight at McGregor and full-back Daryl Janmaat blazed high and wide from distance in an encouraging start for the Magpies, but as the half wore on, Pardew's men rather ran out of steam with Riviere's 38th-minute glancing header across the face of goal as close as they came to troubling the Tigers' keeper thereafter.

For their part, Hull were able to create little of note despite the muscular efforts of Diame in the middle of the park, although Jelavic shot straight at keeper Tim Krul after full-back Andrew Robertson had surged down the left and pulled the ball back for him with 24 minutes gone.

However, the Croatian made no mistake when presented with his second clear-cut chance four minutes into the second half.

Jack Colback was guilty of dwelling on the ball inside his own penalty area and when it was fed out to Ahmed Elmohamady, he clipped it towards Jelavic, who volleyed it spectacularly past the helpless Krul.

Anti-Pardew chants rang out once again, but the home fans were on their feet with 54 minutes gone as Cabella met Mike Williamson's driven cross with a firm side-foot only to see McGregor get down well to block it with his legs.

The Scot denied the Frenchman once again with a brave block three minutes later, seconds after substitute Sone Aluko had only just failed to make a meaningful connection with Robertson's left-wing cross at the other end.

Krul was relieved to see Stephen Quinn fire wide from no distance at all after Tom Huddlestone's 62nd-minute shot had fortuitously ricocheted to him off the defensive wall, but he was not so fortunate six minutes later.

Diame was allowed time and space to move the ball on to his left foot before unleashing a shot which screamed past Krul and in off the upright.

Pardew had Cisse ready on the sideline as the second goal went in, and his decision to use him as a replacement rather than strike-partner for Riviere did not go down well.

However, the Senegal international made his mark within five minutes of his arrival, drilling a shot past McGregor at his near post from Tiote's pass to spark a frenzied conclusion to the game.

And there was more to come from Cisse as he stabbed home an 87th-minute equaliser from Gouffran's knockdown to snatch a point. 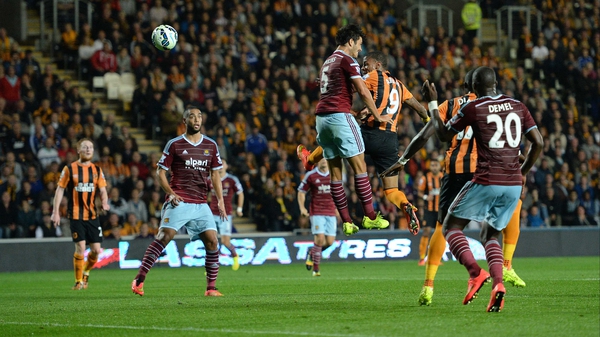 West Ham battle back twice to earn a point against Hull