Athlone Town inched another small step closer to their rivals at the foot of the Airtricity League table tonight when they recorded a fifth successive draw in a scoreless clash with Bohemians at Lissywoollen.

The visiting Gypsies exerted huge pressure on the hosts for the majority of the tie and Dinny Corcoran in particular spurned several chances to deliver a decisive goal, but a red card for Bohs’ sub Jake Hyland gave the Town the upper hand for the closing fifteen minutes.

However the goal they badly craved failed to materialise as none of their play resulted in a chance that asked sufficiently tough questions of Dean Delaney in the Bohemians goal.

A very lively opening ten minutes in which both sides attacked the game with vigour and both created half chances to open the scoring suggested that an end-to-end tie was in store; however Bohemians gradually took control of the game at the heart of the midfield and they slowly began to push Athlone further and further back.

An injury to Craig Walsh didn’t stem their momentum in the slightest as they continued to deny Athlone any time on the ball and while they failed to make a breakthrough at any stage before the interval, few of the 560 people in attendance could have imagined that it was anything other than a matter of time, such was their complete and utter control of the football during that opening half.

Neither did they miss a beat after the restart and could easily have scored three times in the first six minutes of the second half.

Kevin Devaney had one shot blocked and Dinny Corcoran was wide with a header from a Karl Moore corner.

But Corcoran will be hugely disappointed with his failure to score off the ground when he latched onto an underhit backpass from Kevin Knight and rounded Ryan Coulter, only to hit the side netting from a tight angle with the goal unguarded.

Athlone began to show signs of life around the hour mark, even though they were still struggling to overcome the pressure exerted on the man in possession by the Bohs tacklers.

However the game turned completely when Jake Hyland committed a late foul and drew a second yellow card from Paul McLaughlin in the 74th minute.

Their numerical advantage was hugely apparent in those closing stages and the Town controlled possession and played the game entirely in the Bohs half for those last fifteen minutes, but critically, they never forced Dean Delaney to make a tough save.

Eric Foley twice got a shot away under pressure but in neither instance was his effort sufficiently powerful to stretch Delaney.

Arguably their best chance fell to Kealan Dillon in the second minute of injury time when Athlone were awarded a free-kick just outside the penalty area. However the midfielder failed to hit the target with his effort, instead sending the ball high and wide and condemning his team to another week at least at the foot of the league table. 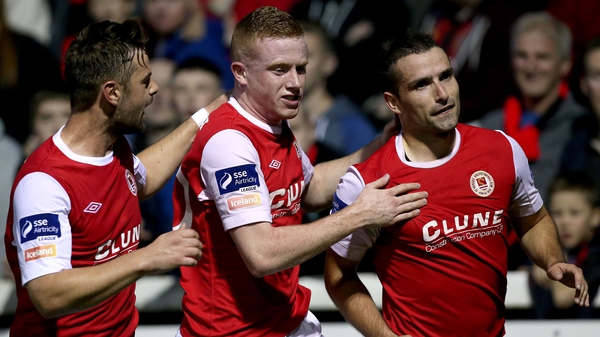