Mediocre players from overseas are taking places in club squads that should be going to young English players, Football Association chairman Greg Dyke has claimed.

The FA has announced proposals to cut the number of players from outside the European Union coming into the English game by up to 50%, including banning clubs sending such players out on loan, preventing Football League clubs from signing them and making the appeals process much tougher.

"Everyone recognises the present system is bust,” Dyke told Sky Sports News. "The rules say elite non-European players - the very best - should be allowed to come in and we agree with that.

"What we are saying is there are a lot that aren't [the very best], that don't play that much and do take squad places and a lot particularly in the Football League disappear after a year or so. The system doesn't work at the moment.

"What we are saying is 'Let the best players come in but give the rest of those squad places to young English kids.

"We still have the problem of good kids aged 17 and 18 and they are not getting enough competitive football so we are still looking at how we improve that position."

The proposals are part of a number of changes recommended by Dyke's England Commission. He said he would make further announcements in October on plans to improve grassroots facilities and coaches.

The proposals on non-EU players would also mean only players from the top 50-ranked countries in the world could be signed unless the transfer fee is more than a fixed figure, either £10m or £15m.

The issue of a fixed transfer fee is likely to be opposed, however, as some players would be available for free if they are at the end of their contract.

The ruling would apply to all players from Brazil, Argentina, Asia, Africa, the Americas, and Australasia who do not hold EU passports.

The FA will now hold talks with the Premier League, Football League, PFA, LMA and the national FAs of Wales, Scotland and Northern Ireland.

Dyke said he expected the other stakeholders to come up with their own proposals.

A Football League spokesman said: "We will consider the consultation before responding in due course."

Dyke also said he would back moves to bring video replays in to help referees for key decisions such as awarding penalties.

He was  uncertain about FIFA president Sepp Blatter's idea to allow managers a number of challenges to referees' decisions but believes video replays should be brought in.

The FA has a powerful voice as it has one of the eight votes on the International FA Board (IFAB), the game's law-making body, along with Scotland, Wales, Northern Ireland and FIFA, which has four votes. The IFAB is due to discuss proposals in March.

Dyke told Sky Sports News: "I for instance would allow a referee to go straight to the cameras [replay] for a penalty but you can't do that for every decision or the match would never finish.

"You don't want to throw the game away - you have seen in rugby where referees hardly make a decision about tries now, that wouldn't be a good idea for soccer but I do think use of technology should be considered carefully.

"In 10 years' time I think we will look back and think 'wasn't it quaint we didn't use technology to help make certain decisions'."

Asked about Blatter's idea for allowing challenges by coaches, Dyke added: "I'm not sure about managers being able to throw in the towel and say 'we want to challenge that'.

"I do think the laws on technology will change but it will take time and we have to do it slowly, try certain things and see if it works because you could disrupt the game completely if you are not careful."

Meanwhile, Dyke reiterated his view that it is "a mistake" for Blatter to stand for a fifth term in office but did not back the one other person who has said he will stand for FIFA president, the French former FIFA executive Jerome Champagne.

Dyke said: "I think it's a mistake, I don't think he should be standing. He stood last time on the basis that he would not be standing again. He is 78 and will be 82 or 83 when the term finishes and it always good to let younger people have their time.

"The FA would like to see another candidate and a proper competition. The FA will decide who it supports at a later stage if we think there is a serious candidate but he [Blatter] is probably going to win if anybody stands anyway."

Dyke also said the pressure that had been building on England manager Roy Hodgson had been totally lifted by the 2-0 win in the Euro 2016 qualifier in Switzerland.

"You could feel the pressure building up on Roy and that one result has killed it. It was a very good performance and our younger players played very well in what was the hardest match in the group.

"We now have a very good chance go to France with a young side and hopefully do well." 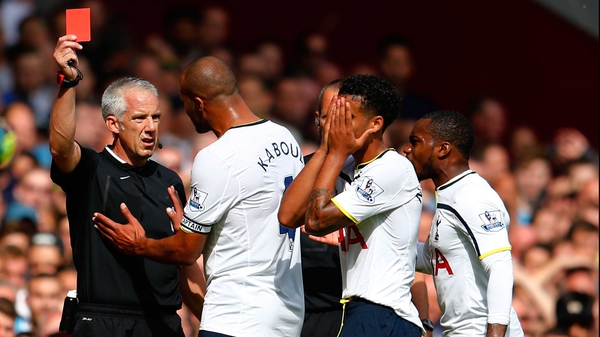