Hull owner Assem Allam has revealed that he put the club up for sale less than a day after his controversial "Tigers" rebrand was rejected and has also appealed against that verdict to the Court of Arbitration for Sport.

The 75-year-old Egyptian made a rare appearance in front of the media to "clear the air" after rumours that he had already completed a sale, but appeared to confirm he was running two entirely opposite courses of action simultaneously.

Allam revealed he had put Hull on the market on April 10, just 22 hours after the Football Association Council threw out the plan to rename the club Hull Tigers and ditch the historical Hull City AFC moniker.

But he is also attempting to have that overturned at the highest level and will remain at the helm if successful.

With a touch of flippancy somewhat at odds with a personal investment ranging between £70-100million, he declared his preferred outcome "whichever comes first" and would "give it away" if neither proved successful.

Allam spoke for more than 45 minutes, littering his oration with obscure metaphors and non-sequiturs, but the hard information came in a prepared statement at the beginning.

In it, he said: "Lately we have seen a lot of rumours around and I've decided it's better to clear the air.

"We stated earlier this year that the club would be for sale if our attempt to globally promote Hull Tigers as a brand name and playing name be blocked.

"As a consequence of the FA's decision on April 9 I announced on April 10 that Hull City is for sale - the club, not the (city) council.

"I am using the wording Hull City now to show respect to the FA decision.

"This announcement is in accordance with my decision 10 months ago that I would walk away within 24 hours (if the rebrand was unsuccessful).

"In actual fact it was 22 hours. When I say something I mean it. I don't call bluffs.

"We have also begun the appeal against the FA decision via arbitration and we are hopeful of a positive outcome or that the FA reconsider their decision.

"Until the conclusion of that appeal or the sale, whichever comes first, we will remain fully committed to the club.

Despite saving the club from financial oblivion when he took over in 2010 and overseeing the most successful period in its history over the past season, Allam's single-minded focus on the rebrand has led to antipathy from some sections of the fan base.

A protest group called City Til We Die have taken up the cause with particular vehemence and chants of "we say no Allam, we say no" still go up at home games after 19 minutes and four seconds - timed to represent the founding year of the club, 1904.

"I haven't finished and if I end up selling I would be selling with tears in my eyes because I would not have finished what I wanted to do." - Assem Allam

But he still believes there is a "silent majority" of supporters who back his plans and said that the CAS appeal was initiated in their name.

"I've gone for arbitration for one reason: I don't want the silent majority to criticise me for not going all the way," he said.

"If I ignore the arbitration and just say it is to be sold I will have let the silent majority down.

"I want to do my best for the club and the fans, even though the silent majority kept silent, until the end."

Allam admits he sees unfinished business at Hull - and even talked loftily of breaking the Premier League's top five in just a couple more years.

"What I had in mind was to stay in Premier League, another year to go mid-table and another two years to go top five then Europe becomes a matter of course," he said.

"I haven't finished and if I end up selling I would be selling with tears in my eyes because I would not have finished what I wanted to do.

"But there is no compromise. I don't have a habit of settling for halfway."

Allam's main argument has always been that the Tigers brand would help bring new investment into the club, helping make it self-sustaining past his own personal wealth.

He said he had hard evidence of that in a failed sponsorship agreement and bemoaned the lack of commercial opportunities that existed as a result of Hull City Council's ownership of the KC Stadium.

"There was a sponsor for the shirt (this summer), no names mentioned," he said. "We had an offer in writing from the far east for an amount. The day the FA said no, they withdrew the offer. We found an alternative, £1m a year less. Who pays for that?

"You want AFC, you want City, please yourself. Come and pay for it.

"At the moment, because we have no other income, I pay, as evidence of my commitment to the local community - but there is a limit and I have gone past that limit." 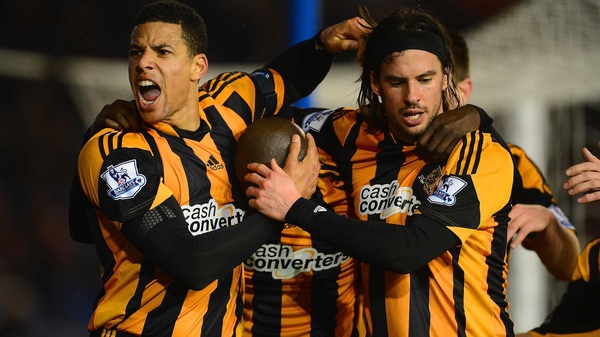