Barcelona's Uruguay forward Luis Suarez can make his debut in the La Liga 'Clasico' at Real Madrid on 25 October, the day after a FIFA ban for biting an opponent at the World Cup ends.

Spain's professional league (LFP) had earlier confirmed the date of the game, the first meeting of the bitter rivals since Real beat Barca 2-1 in last season's King's Cup final.

"Luis Suarez will be able to play in the 'Clasico' at the Santiago Bernabeu on Oct. 25," Barcelona said on their website.

"The Court of Arbitration for Sport (CAS) confirmed to FC Barcelona that the Uruguayan forward's sanction expires the day before," they added.

"Therefore, Suarez would be able to make his official debut in the match against Real Madrid if that is what (coach) Luis Enrique decides."

CAS last month upheld FIFA's decision to sideline Suarez for four months and ban him for nine internationals after he bit Italy defender Giorgio Chiellini at the World Cup in Brazil.

The court ruled a separate ban from all football-related activities was disproportionate and Suarez, who joined Barca from Liverpool for €81.25 million, has since been training with his new team mates. 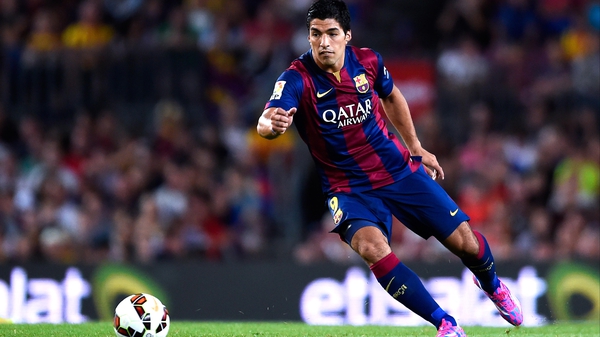 Luis Suarez promises to 'be intelligent' upon return