The home side performed well below their best and were fortunate to be ahead at half-time. Gavan Holohan steered Cathal Brady’s cross past Ryan Coulter, while John Mulroy, Kealan Dillon and Philip Gorman all missed great chances for the visitors.

Luck seemed to be going against Athlone in the second half too as Mulroy was stretchered off and claims for a penalty fell on deaf ears, while Drogs keeper Micheal Schlingermann made some fine saves.

But with three of the six added minutes played, Sweeney popped up with what could be a crucial strike for the midlanders.

Athlone made the more encouraging start and gave the home fans a couple of scares in quick succession as Sean Brennan shot narrowly wide from 20 yards and John Mulroy was inches away from connecting with Kevin Knight’s pinpoint cross.

But crucially they couldn’t make their dominance count and Drogheda then struck from their first real attack on 28 minutes.

Gary O’Neill was the instigator with a superb cross-field pass to Cathal Brady and the winger cut the ball back for Holohan who steered the ball through a crowd of players and just inside Ryan Coulter’s right-hand post.

If that was hugely deflating for the visitors, they didn’t show it and with a bit more luck in front of goal they could have been ahead by half-time.

Philip Gorman somehow failed to connect with a superb Sean Brennan cross, Mulroy steered the ball wide under pressure from Drogheda right-back Daire Doyle and Kealan Dillon missed the best chance of all when firing wide in a one-on-one with Schlingermann after Mulroy’s clever dummy put him in the clear.

The Boynesiders’ only other clear sight of goal stemmed from a slick free-kick move in the 32nd minute involving Holohan and Cathal Brady whose cross was steered wide by Alan McNally.

Athlone’s poor finishing continued into the second half as the unmarked Gorman nodded wide from an Alan Byrne cross and they suffered another blow just moments later when Mulroy was stretchered off after an innocuous tackle in midfield.

The game went into a lull for the next half-hour, although the visitors had stifled claims for a penalty when Gorman went down in a challenge with Paul Andrews.

Athlone had to throw caution to the wind as time began to run out, and a Dillon snap shot forced Schlingermann into a superb save to his right in the 77th minute.

The Drogheda keeper came to the rescue again on 80 when parrying a Dillon strike after substitute James O’Brien had robbed a defender on the end line.

O’Brien made a big impact as Mulroy’s replacement and he tested Schlingermann again from long range with seven minutes left. 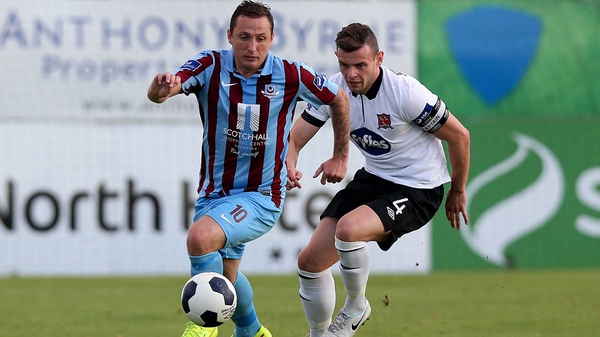