Diouf ran from deep inside his own half to nutmeg Joe Hart after 58 minutes and hand the Potters a first top-flight away victory over City since 1980.

Diouf, who was denied a penalty in the first half, might also have scored an instant second as City lost their composure.

City, who had won their previous seven Premier League matches, wanted a spot-kick themselves late on but Yaya Toure was booked for diving after a challenge by Erik Pieters.

Toure had earlier had one of City's best chances when he struck the bar in the latter stages of the first half.

The two line-ups suggested the game could be an open and attack-minded one, and so it eventually proved after a cagey first half.

Sergio Aguero came in for his first start of the season after two goals off the bench, and Stoke included Victor Moses, Peter Crouch and Jonathan Walters.

Aguero seemed set for a rough afternoon as he was hurt in a heavy tackle from Ryan Shawcross and required treatment after just two minutes.

Stoke created the first serious opportunity when Steven Nzonzi broke, but the Frenchman failed to keep his composure and blazed well over.

The former Arsenal right-back cut the ball back for Samir Nasri to test Asmir Begovic with City's first opportunity.

Sagna showed his ability in defence with a well-timed challenge on Moses but, on the opposite flank, Aleksandar Kolarov was caught out and lucky not to concede a penalty.

Kolarov was wrong-footed by Diouf and then appeared to trip the Senegal forward on the edge of the area. Diouf appealed to referee Lee Mason but the official hardly seemed to give the incident a moment's thought.

Toure shot over as City pieced together a good move but play was held up after an off-the-ball tussle between Stevan Jovetic and Shawcross.

The pair squared up to each other but Mason, City captain Vincent Kompany and Stoke goalkeeper Begovic stepped in.

City were forced into a change when midfielder Fernando, impressive in his first few appearances for the club, seemed to injure his groin. Fellow Brazilian Fernandinho was his ready-made replacement.

City produced their best attack of the first half just before the break when Aguero's backheel fed Kolarov and his cross was clipped against the woodwork by Toure.

Nasri went close to opening the scoring soon after the restart but Phil Bardsley made a timely intervention to deflect his effort narrowly wide.

City appeared to have stepped up a gear and Toure extended Begovic as he met a Nasri cross with a well-struck shot.

Stoke were not rattled, however, and took the lead in exhilarating fashion just before the hour as Diouf started a breakaway from inside his own half.

His touched the ball past Kolarov, outpaced Fernandinho to reach the area and then slid a cool shot through Joe Hart's legs.

It might have immediately got worse for City as Peter Odemwingie robbed Martin Demichelis and whipped in a dangerous cross, but Diouf was inches away from connecting.

Odemwingie had only entered the action at half-time but it proved his last involvement and he was carried off on a stretcher after 65 minutes.

City started to show some urgency and Aguero appealed for a penalty after dribbling into the box and seeing his shot take a deflection which caught Marc Wilson on the hand.

There was then controversy involving Toure when he went down in the area three minutes from time as Pieters challenged, but Mason told him to get up and brandished a yellow card. 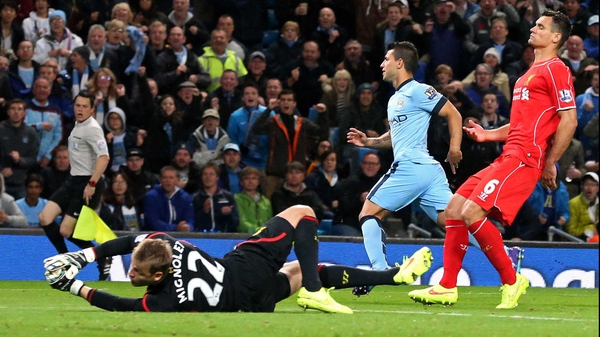