Ki Sung-yueng stunned the expectant United fans by handing the visitors a first-half lead, before newly-appointed captain Wayne Rooney scooped an overhead kick home from close range to level the scores after the break.

But just when United were expected to go on and secure the victory Gylfi Sigurdsson bundled the past David de Gea, who should have done better, to get Van Gaal's reign off to a losing start.

"We didn't reach the level we have shown in the past matches and that is disappointing because this is the most important match," Van Gaal told BT Sport 1.

"We were disappointing in defence and we are disappointed with ourselves and that's why we lost today."

The Dutch boss, who has won league titles with every club side he has managed so far in his career, quickly batted away suggestions that the opening-day performance will have a big impact on his transfer plans.

"No, because that is a short-term assault I think. Of course we need defenders but I have already said that in former press conferences," he added.

"You cannot say because of one game that we lost, and all the others we won, that it is the defence. It's the team.

"We never played as a team I think and that's our error and also we don't reach the required level and maybe because of that we haven't played like a team." 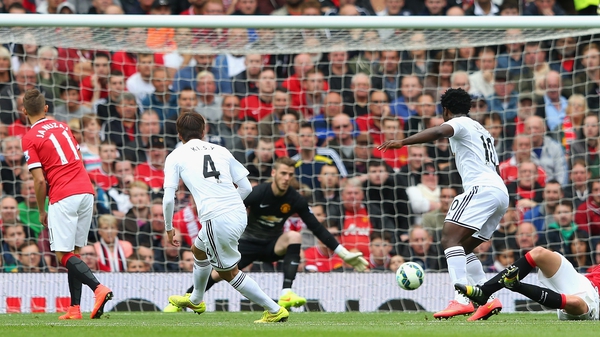