The 23-year-old central defender has finally completed a move which was originally proposed seven months ago and he is keen to settle in and help the side build on a second Barclays Premier League title in three years.

City first tried to secure the Frenchman in the January transfer window, but complications with the player's third-party ownership meant it was impossible to complete within the month.

However, given the additional time for negotiations, the champions have been able to thrash out a solution to a complicated deal, the details of which have not become much clearer following its completion.

Former club Porto released a statement to the Portuguese securities market commission indicating they were paid €30.5million (£24.4million) for 56.67 per cent of the rights of the player.

However, Press Association Sport understands City have paid a total of £32million (€40million) for the transfer.

The intricacies of who paid what to whom is of little interest to Mangala, however, who just wants to begin a new chapter in Manchester.

"City is a top club in Europe. For me, it was an important step to leave Porto and join Manchester City in order to continue my progress," said the central defender, who has signed a five-year contract.

"I want to win titles and I believe I can do this. I am ambitious and this is why I am here.

"I'm very happy to come to England because for me the Premier League is the best league in the world."

Mangala brings much-needed strength to City's defence, which was exposed in their 3-0 FA Community Shield defeat to Arsenal at Wembley on Sunday.

With captain Vincent Kompany and Martin Demichelis, City's established centre-back pair last season, sitting out the match as a result of their World Cup exertions with Belgium and Argentina, the makeshift pairing of Dedryck Boyata and Matija Nastasic looked less than comfortable.

Kompany and Demichelis are likely to return for City's Premier League opener at Newcastle on Sunday, but Mangala will provide important cover which was lacking last season but still did not derail their title triumph.

Mangala believes he will adapt quickly and hopes the presence of former Porto team-mate Fernando, who City signed in June, and some other familiar faces will make the settling-in process easier.

"It is a very intense and very aggressive competition. There are plenty of goals, so it is also really nice to watch and I can't wait to get started," the new signing told mcfc.co.uk.

"The fact that Fernando is here is better because I played with him at Porto, but there are also other players that I know like (Bacary) Sagna, (Gael) Clichy and (Samir) Nasri."

"He is already a fine player but, in my opinion, he has all of the mental, physical, technical and tactical attributes to become one of Europe's very best defenders." - Manuel Pellegrini

He may be another foreign import - City had no English player in their starting line-up at Wembley - but the City boss is not concerned about where his players come from.

"It doesn't matter if they're English players, American players, Spanish players. For me it's exactly the same," he said in the aftermath of the defeat.

"In every competition we play I'll play the team that I think is best to win that game."

On the arrival of Mangala, he said: "I'm delighted to have added a player of Eliaquim's quality in the squad ahead of the new season.

"He is already a fine player but in my opinion, he has all of the mental, physical, technical and tactical attributes to become one of Europe's very best defenders.

"Eliaquim is a player I believe will make an immediate impact in the Premier League, thanks to his physicality, his reading of the game and quality on the ball.

"I think he will prove to be a great signing for us." 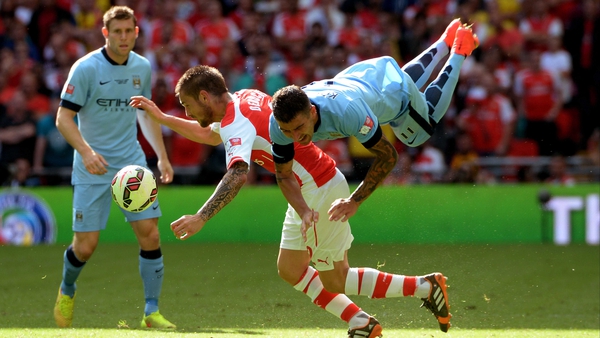