Germany's World Cup hero Mario Goetze said he did not have time to think about what he was doing when he controlled the ball with his chest before sweeping a sweet volley past Argentina's Sergio Romero in the final.

"You don`t really think very much when youre in a situation like that," Goetze, 22, said in the Bild newspaper on Wednesday in his first interview since scoring the winning goal.

"I could try to describe what happened to you but only after taking a look at the replay myself. In the match it all happens intuitively," added Goetze whose extra-time strike gave Germany a 1-0 victory. 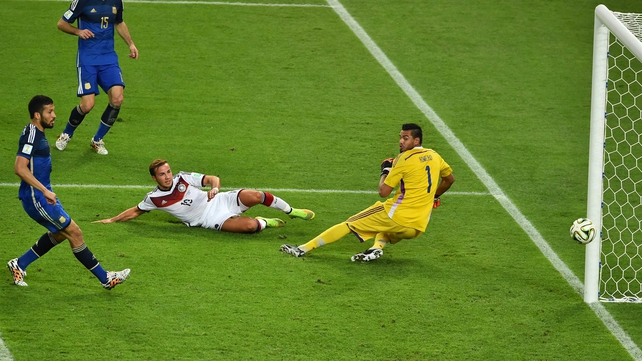 The Bayern Munich forward dismissed suggestions he had had a mediocre World Cup until coming on before extra-time in the final after staying on the bench for most of the knock-out round.

He started Germany's first four matches but was replaced at half-time in the round of 16 match against Algeria.

"Everyone wants to play as much as possible in the World Cup," said Goetze. "I think that I made a contribution to our winning the World Cup. Whenever I got my chances, my performance values were alright. I kept training hard (after being benched) and kept believing in myself."

Goetze said he did not want to give any interviews after the World Cup because he wanted to digest it all himself first.

"To be honest I had to let it all sink in first," he said when asked why he had declined to give any interviews.

"I wanted to savour the moment. I also wanted to avoid saying something in a moment of euphoria that would stick forever. I`d rather stay down to earth. That`s why I wanted to get away from it all for a while."

"I had to let it all sink in first. I wanted to savour the moment."

Goetze also took aim at the media for being unfairly critical of him for not wanting to comment at times.

He said he could not understand, for instance, the criticism levelled at him for not celebrating more when he scored twice in Germany's 6-1 pre-tournament win in a friendly against Armenia.

"I've had unpleasant experiences with some journalists in the past, it sometimes went below the belt. It's fascinating that there's an expectation for me to always be absolutely perfect. That`s why I now think twice before saying anything."