Two second-half goals from Gary O’Neill and one each from Cathal Brady and Gavin Brennan handed Damien Richardson the perfect start as Drogheda manager and piled more pressure on relegation-threatened UCD.

Brennan had fired the Drogs into the lead after only seven minutes and the Boynesiders wasted a series of chances to add to their tally before half-time.

After the break, though, they showed the Students no mercy and O’Neill pounced on a short back-pass on 57 minutes before Brady shot home and O’Neill struck again to make it three goals in 10 minutes.

The Boynesiders dominated in the early stages and quickly made it count with a goal after only seven minutes.

A slack UCD pass across the edge of the penalty area was intercepted by Cathal Brady and he rolled the ball towards Gavin Brennan whose powerful shot beat Niall Corbet in the visitors’ goal.

Only for Corbet’s brilliance, Drogheda would have immediately doubled their advantage as Gavan Holohan’s powerful free kick was somehow tipped round the post at full stretch.

Coming up to the 20-minute mark Holohan and Gary O’Neill worked a short corner and the former’s cross was headed over by Alan McNally, and O’Neill then missed the proverbial sitter when failing to connect with Carl Walshe’s centre.

The Boynesiders seemed to take their foot off the pedal for a 15-minute spell, but save for a Robbie Benson free kick which was comfortably held by keeper Micheal Schlingermann, Drogheda remained untroubled and Brennan nearly doubled his tally with a low shot that trundled wide.

Right on half-time Holohan grazed the post after a superb one-two in the box with Brennan and UCD were more than happy to head back to the dressing-rooms still only a goal in arrears.

The Students’ best spell of the match came just after half-time, with Robbie Benson driving them on from midfield along with impressive winger Ayman Ben-Mohamad, but they created no chances of note and Drogheda then hit them with a devastating burst of scoring.

O’Neill pounced on a short back-pass by Ian Ryan to fire past Corbet in the 57th minute and 60 seconds later Cathal Brady ran onto a Holohan pass and finished decisively past the Students’ netminder.

Samir Belhout should have given UCD hope when a rare mistake in the home defence presented him with the ball six yards out, but somehow he scooped the ball wide and Drogheda immediately added a fourth goal when O’Neill nodded home a Brady cross.

With Peter McGlynn and Garreth Brady making their debuts in the latter stages, there’s a good buzz in the Drogheda camp ahead of next week’s Louth derby, while UCD need to turn around their fortunes fast, having also shipped six goals at home to Derry City last week. 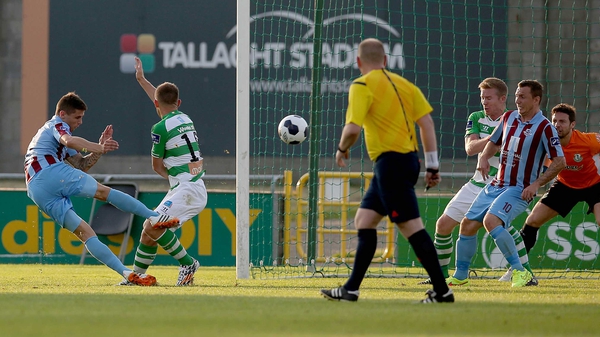