Michael Barker’s injury-time equaliser halted Bray Wanderers’ six game losing streak as they managed to salvage a point with a 1-1 draw against Athlone Town at the Carlisle Grounds on Friday evening.

For much of the game it had a seemed the visitors, who have been rooted to the bottom of the table from the outset, would add further weight to their bid for survival with a crucial victory but Barker, a recent recruit from UCD, produced a curling effort to cancel out Alan Byrne’s early opener.

As it is, Keith Long’s side remain six points adrift and at this stage of the season, such a deflating result could mark the end of their revival under new management. Yet, the Midlanders can take great heart from a performance that, in truth, deserved the points.

From the moment Byrne stabbed home, albeit via a touch off Dave Scully, from close range in the 7th minute, they were in control of proceedings and largely untroubled by the hosts who have been in freefall on the back of a winless run stretching back to early May.

Despite firing blanks throughout, Bray mustered the faculty in the closing stages to stage a late onslaught and were duly rewarded with a point that could, when all is said and done, be a definitive one in their campaign.

The decision to implement new stringent security measures at the Carlisle Grounds hasn’t best pleased the patrons and you would excuse the home supporters for wondering why the club can’t employ such rearguard action on the pitch.

For it only took Athlone seven minutes to expose a disjointed Seagulls defence. Having conceded thirteen goals in their last three outings, it was little surprise Alan Mathews opted for a change in personnel but it made little difference.

If truth be told, the defence are given little or no protection despite a formation being built around two holding midfielders but there was no excuse for the manner in which they went behind.

Graham Rusk’s corner wasn’t dealt with and by the time Byrne managed to prod it goalwards, Scully’s intervention typified his side’s haphazard defending.

Clearly determined to make amends, Scully was involved in the hosts’ most promising moment of a scrappy, if not uninspiring, first half. Having linked neatly with Jake Kelly, his powerful drive from outside the box was always arrowing wide of Ryan Coulter’s post, however.

Indeed, the Athlone goalkeeper was largely untroubled throughout. A brief moment of hesitation when Ismahil Akinade muscled his way through could have proved costly but Eric Foley, who was imperious in the engine room, produced a goal-saving tackle when Dean Zambra had his sights on an equaliser.

In recent weeks Zambra has been deployed in a holding role but his slight frame, alongside Eric McGill, does little to deter the opposition.

On more than one occasion, Keelan Dillon and former Seagull John Mulroy were afforded far too much space and it was the former that looked most likely to capitalise but Rusk was unable to follow suit.

The former Student had done in the hard work in beating the onrushing goalkeeper to the ball first but saw his looping effort bounce agonisingly wide. In the end, it was a costly miss.
Athlone dropped increasingly deeper as the clocked ticked down and would have been forgiven for thinking the danger had cleared when the ball dropped at the feet of Barker twenty yards out but he proved otherwise with a curling effort that gave Coulter no chance. 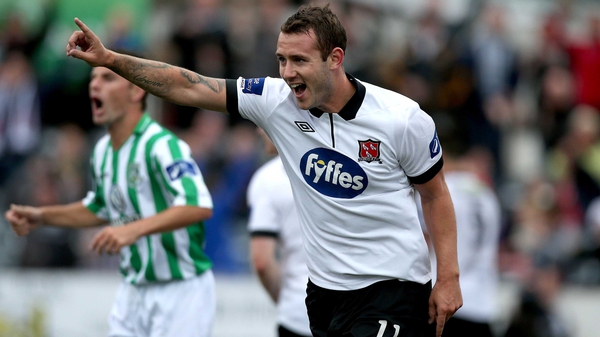