Luis Suarez could make his debut for Barcelona against arch rivals Real Madrid at the Bernabeu.

The date of the first El Clásico of the new Primera Division season is set for the weekend of 25/26 October, with the Uruguayan's four-month suspension coming to an end on 25.

However, if Suarez's appeal to the Court of Arbitration for Sport against his ban for biting Italy defender Giorgio Chiellini during a World Cup match is successful, the former Liverpool man will be able to line-up for the Catalans in their first league game of the season, at home to Elche.

The Court have confirmed they will hear Suarez's appeal, most likely on August 11 or 12.

Madrid rivals and last season's Champions League finalists Real and Atletico will meet again in the third week of the season in a showdown at the Bernabeu.

The game will be the third Madrid derby in a month: the two teams are due to meet each other twice in the Spanish Super Cup, the season's traditional curtain-raiser between last year's league champions and Copa del Rey winners.

Atletico won last season's title at the Nou Camp by drawing with Barcelona, and the two teams will not meet again until the 18th weekend of the season, when Atletico return to the scene of their first title win in 18 years.

Luis Enrique's side will make the trip to the Vicente Calderon on the penultimate weekend of the campaign, hoping to exact revenge for last season's events.

Last season's Segunda Division A champions Eibar will play their first ever Primera Division match against fellow Basque side Real Sociedad, while the other promoted team, Deportivo La Coruna, head to Granada on the first weekend.

Barcelona will finish the season at home to Deportivo, while Real Madrid's final game sees them host Getafe, while Atletico visit Granada. 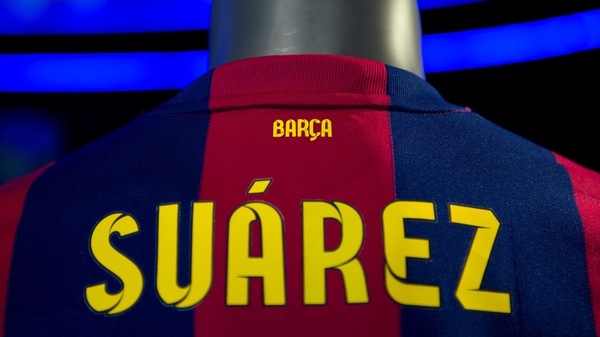