Liverpool forward Iago Aspas has completed a loan move to Primera Division side Sevilla after passing a medical with the Europa League champions.

The 26-year-old will be officially presented at the club's Sanchez Pizjuan stadium on Monday, with the two clubs agreeing terms of a season-long loan deal earlier this week. The deal gives the Spanish side the option of offering Aspas a three-year permanent contract once the loan deal expires.

Just 12 months after completing a £9 million move to Liverpool from Celta Vigo, Aspas is returning to Spain to rebuild his career after an unhappy stay on Merseyside, making just five Premier League starts for Brendan Rodgers' side and failing to score a single goal.

Although Liverpool were involved in a thrilling title race - only pipped to the Premier League title by Manchester City on the final day of the season - Aspas has admitted his year in England had not gone as planned.

"My experience in the Premier League was fabulous on a collective level, but on an individual level it was very hard for me, because I went from playing all the time to not playing at all," he told Spanish radio station Cadena Ser.

"All I want to do is play football and Sevilla have given me that opportunity, and now I hope to be able to pay them back on a big scale"

Aspas' talismanic performances for Celta attracted Liverpool's attention, but the forward had to get used to a peripheral role once Luis Suarez returned from suspension and formed a lethal striking duo with Daniel Sturridge.

"Perhaps I struggled to adapt, I'm not going to kid myself, but above all our striking partnership, which Luis Suarez was a part of, scored 50 goals," said the Galician.

"They produced spectacular performances and so it was very complicated for me to get into the team."

Although Sevilla's two strikers Kevin Gameiro and Carlos Bacca had sensational first seasons with Sevilla last term, Aspas is confident he will be able to hold down a place in Unai Emery's side.

"All I want to do is play football and Sevilla have given me that opportunity, and now I hope to be able to pay them back on a big scale," he said.

"Sevilla deserve to be in the Champions League after the last few seasons they have had. I hope to play as often as possible, and I hope to spend many years in Seville."

Aspas also admitted that, on a non-sporting level, he was keen to swap the city of Liverpool for Seville.

"It wasn't very difficult to make an improvement," he said.

"Even though people say Galicians are used to seeing clouds in the sky and a similar climate to the one in Liverpool, once you return here you treasure Spain a lot more.

"I hope I can adapt and climatise to Sevilla as quickly as possible." 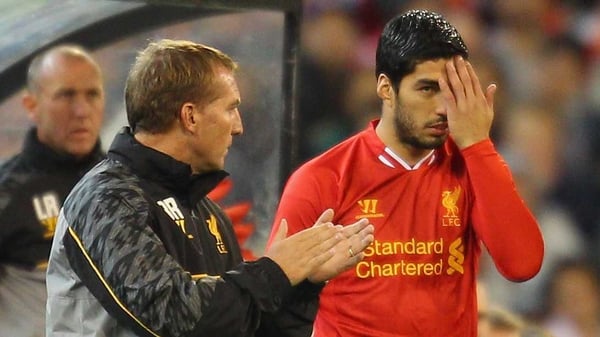 Liverpool boss Brendan Rodgers: We did everything to keep Luis Suarez