Louis van Gaal labelled Manchester United the biggest club in the world as he addressed the media for the first time since taking over at Old Trafford.

The former Bayern Munich, Ajax and Barcelona boss, who was announced as David Moyes' successor in May, took his first training session on Thursday morning before addressing the size of the challenge ahead of him at United.

"I will do my best and that's what I can give. I cannot give predictions because you never know. It's the biggest club of the world, which I know already after two days," the 62-year-old, who has won league titles with every club he has managed, told a press conference.

"I have to adapt to this club. It shall not be easy, but I will do my utmost best. When you see my career, you can see what I have won and that is what I can say. The future shall show if I can do that again."

He added: "It's a great challenge because of the expectation.

Van Gaal's work with Holland at the World Cup - guiding them to third place - delayed his introduction at Old Trafford.

"When you see my career, you can see what I have won and that is what I can say" - Louis van Gaal

He arrived at the club's Carrington training ground for a low-key first day on Wednesday before being unveiled to the press on Thursday.

When asked about not taking a holiday following the World Cup, Van Gaal said he could not think about having a vacation with such a huge challenge hanging over him.

"I could not let them go. When you are asked by the biggest club in the world, it's a big chance for me," he said.

"When there is a challenge like this, I never let it go."

At the start of the press conference he addressed how much of an honour it was to have United hero Sir Bobby Charlton introducing him to the club during this period.

"I want to thank Sir Bobby Charlton because it's a great honour to come in this stadium and to be guided by him.

"My first steps - okay my first steps here were with Bayern Munich and Barcelona, I know that - but as the coach of Manchester United these were my first steps. I was very proud to do that with Sir Bobby Charlton."

The 62-year-old is immediately tasked with avoiding a repeat of last season's poor showing under predecessor Moyes, who was enjoying a quiet day at the Open in Hoylake while Van Gaal was paraded in front of the media.

Van Gaal said Michael Carrick injured himself in training and will be out "for a long time".

The club later confirmed that Carrick had surgery on his left ankle ligaments and would be out for 10-12 weeks. 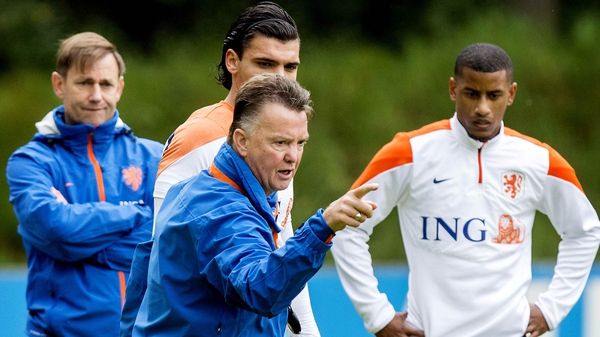