By Ryan Bailey at Craven Cottage

The Republic of Ireland put in a vastly improved performance as they continued their summer programme with an entertaining 0-0 draw with Italy at Craven Cottage on Saturday evening.

Having suffered back-to-back defeats - to Serbia and more recently Turkey - this was a thoroughly satisfactory result and performance which yielded plenty of positives. Once again, however, encouraging approach play went unrewarded as another blank was fired on front of goal.

For much of proceedings, Ireland enjoyed the better of possession but spurred several golden opportunities: not least when substitute Stephen Quinn fired off the underside of the bar from close range in the final quarter.

That said, another defensively rigid outing and encouraging signs elsewhere provided the healthy Irish contingent in attendance plenty to smile about as they headed off into the early evening.

A nasty injury to Riccardo Montolivo, in the infantry stages of this friendly, overshadowed what turned out to be a tasking work-out for Cesare Prandelli’s side. The midfielder will now miss the World Cup as he was stretched from the field. After the game it was revealed that Montolivo requires surgery on his ankle and will go straight to Milan for an operation. 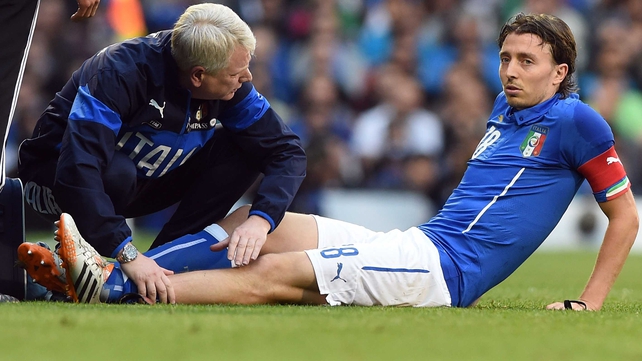 That Italy used the match as a glorified audition ahead of selecting their final squad for Brazil should take nothing away from the Boys in Green, who took the game to their illustrious opponents after an otherwise slow start.

David Forde, who was recalled as one of five changes from the side that suffered defeat to Turkey six days ago, was immediately forced into action as he pushed Claudio Marchisio’s powerful drive to safety. For much of the opening quarter, Ireland were content to sit in their rigid defensive shape as the Azzurri started with energy and purpose.

Much of that was down to the industry of Marco Verratti, who sat deep and orchestrated proceedings with great panache. Italy’s lack of width, however, allowed Ireland to nullify the threat of Italy’s attacking quartet by staying compact and disciplined. 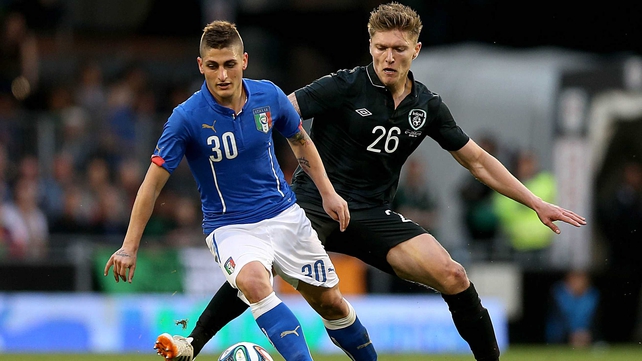 That said, it was the departure of Montolivo which saw the pattern of the game swing. From that juncture, the Italians were hesitant and disjointed. Ireland’s midfield trio - David Myler, Jeff Hendrick and Wes Hoolahan - found pockets of space between the lines and picked holes in the Azzurri rearguard at will.

Firstly, Hendrick broke from midfield but was hauled down on the edge of the area. Anthony Pilkington’s free lacked power and direction though and moments later Meyler’s rasping drive was tipped over by Salvatore Sirigu.

Ireland were left to rue several missed opportunities last week and their wastefulness in the final quarter was again evident here. Shane Long failed to get any direction on his header from Aiden McGeady’s centre and from another dangerous ball from the left, both Hendrick and Pilkington were unable to connect at the front post with the goal at their mercy.

Naturally, both sides made a host of substitutions after the interval but a change of personnel did little to subside the tempo of a game played in front of a deafening atmosphere in West London. Despite the scoreline, the 22,879 in attendance certainly weren’t bereft of entertainment.

Long was again thwarted by Sirigu while, at the other end, Immobile eventually pierced the Irish defence but having slotted substitute Marco Parolo’s scuffed shot home, the flag was raised to cut short any celebrations from those in the Hammersmith end.

Italy upped the intensity thereafter and caused a couple of uneasy moments for the Irish backline, not least when nimble interchange on the edge of the box created the opening for Marchisio but his shot was straight at Forde.

However, the best chance of the evening was to come at the other end. Having got away from his marker, Stephen Quinn was unable to keep his close range effort down after James McClean’s direct approach play down the left.

There would have been no denying Ireland the spoils, but instead they were shared. 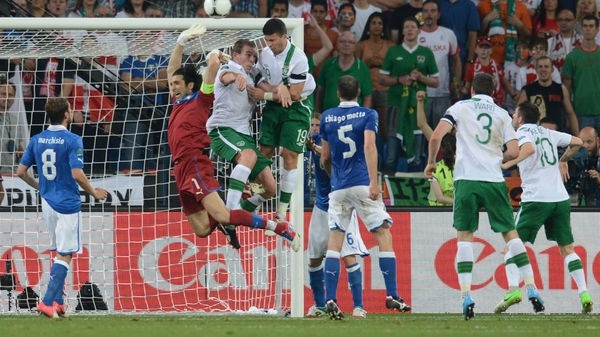