O'Shea's international team-mate found himself a key figure in a dramatic conclusion to Saturday's multi-million Sky Bet Championship showdown between Derby and QPR with Barclays Premier League football at stake.

It was Keogh's late error which handed Bobby Zamora the chance to fire 10-man Rangers into the top flight after the Rams had dominated at Wembley.

He, Jeff Hendrick and Conor Sammon are due to meet up with the Ireland squad, as is QPR striker Kevin Doyle, ahead of Saturday's friendly against Italy at Craven Cottage, and O'Shea will put an arm around his fellow defender.

He said: "Richard will get over it. He's a fantastic player - he's probably been one of Derby's best players, if not the best player, this season.

"It's just one of those things in football. His disappointment was clear to see for everyone, and if he comes into the squad, it will be great if we see him because we will pick him up.

"I know Richard, the type of lad he is. He's a fantastic player and a fantastic fella as well, so he will get over it and come back bigger and better and stronger."

"He's probably been one of Derby's best players, if not the best player, this season"

Rangers' were forced to fight a desperate rearguard action after Gary O'Neil's sending off for a cynical challenge, and they were indebted to another Irishman, Richard Dunne.

The 34-year-old turned in the kind of performance he has done so often for his country over the years to keep Derby at bay and remind international boss Martin O'Neill of his enduring quality.

Dunne made himself unavailable for the Republic's end-of-season friendlies, but O'Shea has few doubts about what he still has to offer.

He said: "You have no need to tell me that, I have played alongside Richard long enough to know what a quality player he is.

"He had his magnet hat on again. Everything was just directed to him and he was in the right position, experience, cleared it all away.

"Especially when they went down to 10 men, he was a vital player for them.

"It's hugely disappointing for the Derby lads, the Irish lads especially, because we know how hard they worked and how well the have played all this season too. To come down to that is gutting for them.

"But obviously for Kevin and Richard, it's pleasing for them."

Sunderland defender O'Shea, 33, could play his 50th game of the season against the Italians before heading off for a well-earned rest after being excused Ireland's trip to the United States to meet Costa Rica and Portugal, and he admits he is ready for a break

Asked how his body was holding out, he said: "Fine, not too bad at all.

"Obviously when the season finished against Swansea, I literally had a few days off and then had a few days on a coaching course and them meeting up with the squad, so there has not really been too much time to have a rest yet. 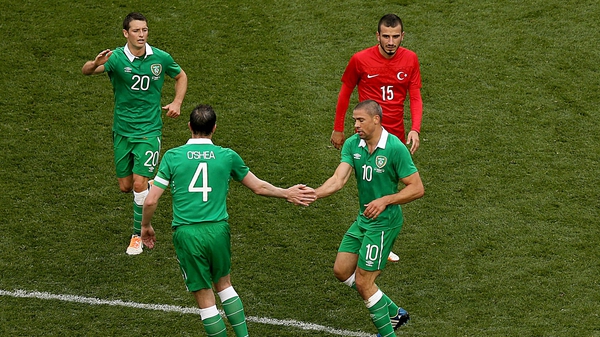