A young and inexperienced Ireland women's XI lost 2-0 today to a Basque Country side containing seven Spanish internationals at the Garmendipe Stadium in Azpeitia.

Two first half-goals from Naiara Beristain left the home side comfortably ahead at half-time but the introduction of Niamh Fahey for the second period made a huge difference to the Irish midfield.

Fahey's 30-minute cameo appearance, as she continues her comeback from a cruciate knee injury, was one of the highlights for women’s national team manager Sue Ronan.

“Niamh certainly made a difference when she came on and hopefully it won’t be too long before she is ready for competitive international football.

"She looked great and had a tremendous impact on the game in the half-hour she was on the pitch,” said Ronan who was pleased with the exercise.

"It was a tremendous experience for the girls and one they will remember for a long time to come.”

For Ronan the game was an opportunity to look at some of the players on the fringes of the squad as well as a few of the U-19 squad who have qualified for the UEFA European U-19 Championships.

“It was a great opportunity to look at the lot of players and I learnt a lot," she said. "I have a better idea now of who is capable of stepping up to the senior team. I also tried a few things with some of the more experienced players and that was very revealing also.”

Goalkeeper Eve Badana had a busy first half as the Basques, who had most of the possession, tested her on a few occasions. The first goal came after a mix-up in the Irish defence and Badana has no chance from the long-range strike by Beristain after 16 minutes which flew to the net.

Beristain's second goal came five minutes before half-time. Ireland were a lot tighter in the second half and Grace Maloney, who replaced Badana at the break, made one excellent save during this period.

Ireland were a lot tighter in the second half and Grace Maloney, who replaced Badana at the break, made one excellent save during this period.

Ireland’s best chance of the game came in the first half when a move started by Badana finished with Sarah Rowe teeing up Aine O’Gorman for a cross that Stephanie Roche fired narrowly wide. 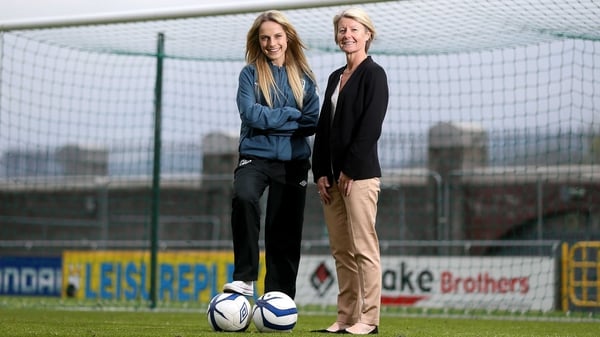