Sligo Rovers secured their first ever Setanta Sports Cup title with a 1-0 cup final win over Dundalk courtesy of Paul O'Conor's first-half strike at a rain-soaked Tallaght Stadium on Saturday.

Sligo were participating in their first ever Setanta Sports Cup final and went into the game without long-term injury absentees Raffaele Cretaro (calf) and Gavin Peers (knee). Alan Keane missed out due to a knee injury he picked up in the run up to the game.

Seamus Conneely deputised for the Galway native, while creative midfielder and captain for the day, Joseph Ndo returned to the side having missed last week's 2-2 draw with St Patrick's Athletic.

Dundalk went into their first Setanta Sports Cup decider since their 2011 defeat to Shamrock Rovers without captain and long-term casualty Stephen O'Donnell, manager Stephen Kenny chose to go with the tenacious Chris Shields in his place.

Sligo centre half Jeff Henderson almost gifted Dundalk an early lead in the opening moments. The Englishman miss-controlled the ball before possession fell to Darren Meenan who teed up Richie Towell, however, the former Celtic midfielder could not keep his shot down on a greasy Tallaght surface.

Another mistake from a Rovers player lead to Dundalk's second chance of the game on eight minutes, David Cawley's slip-up led to the ball falling to Daryl Horgan who could only place the ball into Gary Rogers' side-netting from the angle.

Aaron Greene saw his effort from inside the area deflected away by one of a host of Lillywhites defenders on 12 minutes.

A minute later, the Bit O’Red took the lead somewhat against the run of play. The quick thinking John Russell slipped in Greene whose low cross was neatly finished by O'Conor at the front post to hand Ian Baraclough's side the lead.

Pat Hoban was unlucky to see his header glance narrowly wide of the Sligo post having got onto the end of a John Mountney cross. Soon after, Dane Massey's well struck volley sailed over the Sligo crossbar as the Louthmen looked to capitalise a dominant spell.

Sligo were dealt a significant blow ten minutes from the break as they were forced to withdraw Ndo and reshuffle their midfield due to an injury to the former Cameroon international. Greene slotted into the middle, while substitute Danny Ledwith took his place on the left.

Massey's pin-point cross from the left was nodded wide by the incoming Hoban five minutes from the break. This was to be the final chance of the opening half, as both teams went in at the break with the reigning FAI Cup holders holding the slenderest of leads.

Russell forced Dundalk goalkeeper Peter Cherrie into a good save down low to his left, nine minutes into the second half. Ledwith's majestic turn minutes later brought him past his marker, but Cherrie was equal to the shot once again.

Towell's first-time strike on the hour mark came close to levelling the game as the Oriel Park outfit continued to fire warnings in Sligo's direction. Russell took advantage of some slack defending from Meenan on 67 minutes, but the former St Pat's man failed to keep his shot from distance down.

Substitute Kurtis Byrne saw his effort fizz past the post as the game began to really open up despite the horrendous weather conditions.

Kenny introduced former Sligo striker David McMillan with ten minutes remaining as Dundalk went all out in an effort to find the equaliser.

McMillan almost found the net in the dying minutes. Byrne's superb chip forward was acrobatically flicked toward goal by McMillan, but Rogers did well to tip the ball wide as the rain continued to pour.

And despite the best efforts of a hard working Dundalk side, Sligo prevailed to secure their first Setanta Sports Cup title.

Another medal for the collection pic.twitter.com/pMMpw0MCd8 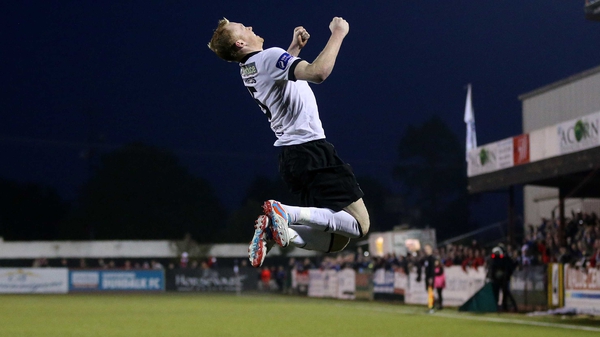