Phil Jones admits Manchester United fans had every right to boo their team off following their 1-0 home defeat to Sunderland.

The feel-good factor that arrived at United following Ryan Giggs' appointment as manager disappeared on Saturday afternoon as the Welshman tasted defeat for the first time during his caretaker reign.

Sebastian Larsson swept home Connor Wickham's cross on the half-hour and United never looked like mounting a successful comeback against the Black Cats, who are now all but safe.

United lacked urgency, width and speed. Had Emanuele Giaccherini and Fabio Borini found the net instead of the woodwork in the second half, the scoreline would have been almost embarrassing.

Fans started streaming out of Old Trafford with 10 minutes to go, and a few of those who remained booed the players off - justifiably so in Jones' eyes.

"Of course they had every right to do that," the United defender said.

"You can understand that totally. They have had a difficult season. It has not been easy for them, especially here at Old Trafford.

"It's the story of our season isn't it? You win one, but you can't carry the form on. It's disappointing."

But this term things have been far worse at Old Trafford. Under Giggs and David Moyes, United have been beaten seven times in the league.

That is the club's worst home record since the 1973-74 season, when United were relegated.

Jones admits he and his team-mates cannot afford to have such a woeful record on home turf next term.

"We are up at the top of the table on away form, but the home form for whatever reason has not been as good." - Phil Jones

"We are up at the top of the table on away form, but the home form for whatever reason has not been as good," the England defender said.

"It's caught us out and that's something next season we really nail down and work on."

With Louis van Gaal reportedly set to be appointed next week, United have one more chance to register a home win against Hull on Tuesday.

The match could be a significant one for a number of reasons.
Nemanja Vidic will play his final game at Old Trafford.

For Rio Ferdinand and Patrice Evra - both of whom are out of contract this summer - it could be their last home game too.

And it may well be the last time United fans get a glimpse of Giggs for a while as he has not been assured that he will figure in Van Gaal's plans - either as a player or coach.

Ticker tape and champagne usually follow United's final home match of the season, but even though that will not be the case this term, Jones still wants to end the year on a high.

"We can't afford to make it flat," he said. "We have to lift ourselves again and win the game for the fans."

Sunderland, who claimed their first win at Old Trafford for 46 years, are likely to have reason to celebrate on Wednesday following their penultimate home game of the season against West Brom.

Just three weeks after being seven points from safety at the foot of the table, Sunderland are within touching distance of guaranteeing their Premier League status.

"The players never gave up."

Poyet believes Premier League player of the month Wickham, who has scored five goals in his last four games, has been key to Sunderland's revival.

"He has given us something special," said Poyet of the 21-year-old striker, who had loan spells at Sheffield Wednesday and Leeds earlier this season.

"He scored the goals we could not find. He is on fire. A player with his physique and his ability can go wherever he wants." 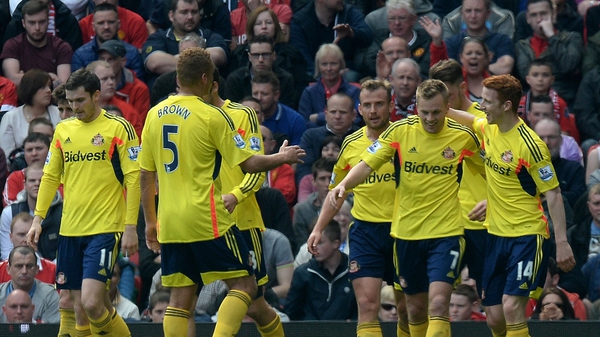