Fulham bade farewell to the Barclays Premier League with a whimper as a crushing 4-1 loss at the Britannia Stadium combined with results elsewhere consigned the Cottagers to relegation to the Championship.

Goals from Peter Odemwingie, Marko Arnautovic, Oussama Assaidi and Jonathan Walters sealed the visitors' fate after a dismal performance in which a late consolation from Kieran Richardson was rendered irrelevant.

Sunderland's 1-0 win at Old Trafford confirmed Fulham faced the drop for the first time since they plunged into the league's bottom division in 1994 – and Felix Magath's first in his lengthy career with nine different clubs.

The Cottagers had travelled up the M6 hoping for a miracle but might have guessed it would not be their day when Hugo Rodallega, whose winners against Norwich and Aston Villa had given them hope, was ruled out due to illness.

But Magath's men had no excuses for a simply abject performance, particularly in the first half, from which they were highly fortunate to escape with just a single goal deficit.

The home side, with nothing to play for but a top 10 finish, dominated from the first whistle and should have gone ahead in the third minute when Oussama Assaidi blazed over from a Steven Nzonzi cut-back.

Lewis Holtby sailed a long-range free-kick straight into Asmir Begovic's arms in what passed for one of the visitors' few early chances, while at the other end a blunder by Mahamadou Diarra played in Stephen Ireland, who was only denied by a fine close-range save from David Stockdale.

Assaidi stung Stockdale's hands again on the half-hour before Hangeland booted clear, and but for the tenacious midfield work of Richardson the Cottagers looked strangely devoid of fight.

Even news of scores going against them elsewhere could not rouse the visitors and the increasingly inevitable Stoke opener arrived on 39 minutes when Ireland's shot struck Dan Burn, ricocheted against the underside of the bar and bounced down for Odemwingie to tap home the simplest of openers.

It was all Stoke deserved for a first half bristling with purpose, and it could have been more moments later when Arnautovic brought another good save out of Stockdale.

The massed ranks of visiting supporters did their best to rouse their side at the start of the second period with the other half-time scorelines weighing heavily against them.

But it soon reverted back to one-way traffic as Odemwingie found space on the Stoke left in the 52nd minute and his dangerous cross sailed unchallenged across the box.

Fulham briefly threatened when a cross from substitute Ashkan Dejagah was headed away by Marc Wilson, but almost immediately the visitors were left reeling from a classic counter-attack.

Odemwingie again found space on the left and his cross squired through Brede Hangeland's legs to the unmarked Arnautovic, who smashed his shot high into the roof of the net.

Still Fulham were not roused from their torpor, Assaidi only denied a third for Stoke in the 58th minute thanks to another superb save from Stockdale.

Stoke continued to press, Arnautovic drilling a seemingly goalbound effort against Heitinga with the visitors looking curiously resigned to their fate.

And their nightmare continued in the 73rd minute when, after Darren Bent scuffed a shot in the Stoke box, the home side launched a swift counter-attack which ended in Arnautovic squaring for Assaidi to knock home the goal his performance deserved.

It was a mark of Fulham's resignation to their fate that Richardson's consolation goal on 80 minutes, when he turned in a right-wing cross from Dejagah, was met with next to no celebrations.

Two minutes later, the visitors' misery was complete when substitute Walters finished off another flowing counter-attacking move to seal a superb performance from the hosts - and one Fulham will wish to forget. 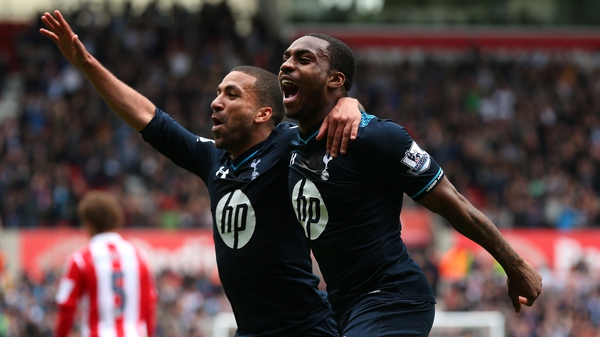