Fit-again Toure teed up Dzeko's 24th goal of the season before firing his 23rd as Manuel Pellegrini's men capitalised on Liverpool's 2-0 home defeat to Chelsea.

City closed within three points of the Anfield league leaders and just one of the second-placed Blues, thanks to a Toure masterclass as muscular as it was meticulous.

Toure and his team-mates are now able to draw level on points with Brendan Rodgers' men, given victory at Palace and their game in hand.

City have a trip to Everton and home clashes with Aston Villa and West Ham still to come while Liverpool travel to Palace next, before hosting Newcastle at Anfield on Sunday 11 May, the final day of the season.

The 30-year-old chipped an inch-perfect free-kick into the Palace box, positively begging Dzeko to bisect Scott Dann and Damien Delaney.

The 28-year-old Bosnia striker had little option but to ghost onto the cross and nod the visitors into the lead.

Liverpool's Anfield hiccup against Chelsea cracked the door, but Toure and company booted it open in south London.

Tony Pulis has whipped Palace into far sterner shape than to fold however, and the hosts threatened when Yannick Bolasie's cross almost reached Cameron Jerome.

Jason Puncheon might boast four goals in April, but Palace's form midfielder could find no power with a 20-yard shot.

Dzeko failed to connect with a far-post cross, Dann had to cut out Pablo Zabaleta's knock-down destined for Aguero, and Vincent Kompany headed wide from the corner.

So often City's central force, Toure then sealed his side's dominance with a goal of effortless class, but brutal build-up.

The Ivory Coast star played a simple one-two with Dzeko, then saw no reason not to repeat the feat with Nasri.

Rumbling into the Palace box, with defender Delaney stumbling in desperation, Toure set himself, and dinked the ball past bystander Speroni.

Palace grafted for the half's last word, but Jerome could not reach Puncheon's teasing cross.

Marouane Chamakh wasted a chance to test the shaky Martin Demichelis after the break, firing a loose pass past Bolasie when he could have scythed on undeterred.

One more long-range curling effort that sailed over the bar proved Toure's final offering, the rangy midfielder withdrawn just past the hour in a clear protective measure from Pellegrini.

Palace may have been subdued on the field, but the home support was determined to toast Premier League safety, and manager Pulis' sterling turnaround job.

Aguero had a gilt-edged opportunity to extend City's lead, only to lead with the outside of his right boot and clip the ball straight at Speroni.

Palace's highly-rated keeper then kept out Dzeko's shot despite a wicked deflection off Dann.

City were not to be denied though, leaving London with a credible title chase tucked into the bag. 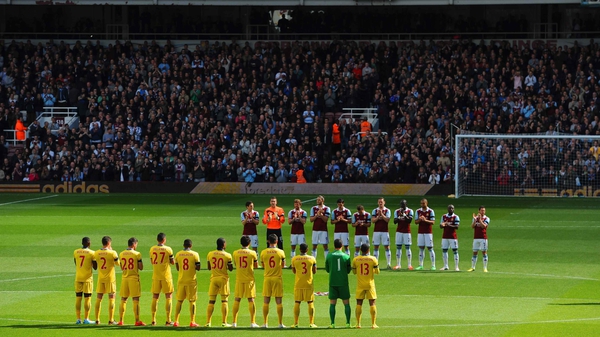