Benfica substitute Lima struck late to give the newly-crowned Portuguese champions a 2-1 win over Juventus in the Europa League.

In the first leg of the semi-final tie in Lisbon, Ezequiel Garay put the hosts ahead in the third minute only for Juventus striker Carlos Tevez to end his long European goal drought in the 73rd minute.

Lima then ensured that Benfica will take an advantage for the return leg in Italy next week by scoring six minutes from time.

Benfica, last season's runners-up in the competition, had the better start and were rewarded early on when Garay's powerful, downward header from Miralem Sulejmani's corner went into the back of the net.

Juventus goalkeeper Gianluigi Buffon did get a hand on Garay's effort but he could not keep the ball out.

Benfica goalkeeper Artur was first called into action in the 14th minute when he kept out Tevez's hard drive from 30 yards.

Juve's Stephan Lichtsteiner then nodded Claudio Marchisio's cross inches wide of the far post but he had been flagged offside.

In the 34th minute, Benfica midfielder Andre Gomes was shown a yellow card for a late challenge on Paul Pogba, meaning he will miss next week's encounter in Italy.

Juve struggled to put a good move together and  wasted two consecutive corner kicks before half-time.

The Serie A leaders looked more dangerous after the break and almost pulled level in the 55th minute when Pogba's header from Claudio Marchisio's cross forced Artur to fully stretch to clear the ball.

Artur was called again to make a save to deny Mirko Vucinic's goal-bound header.

Juve's efforts were finally rewarded in the 73rd minute. Kwadwo Asamoah's cross found Tevez in the box and the Argentinian striker got past two defenders before hitting a powerful 12-yard shot past Artur.

The goal was Tevez's first European strike since April 2009.

Just when Juve looked to be in control, Benfica went ahead. Enzo Perez spotted an unmarked Lima at the edge of the area and the forward fired a right-footed shot past Buffon.

Juve could not get past Benfica's defensive wall in the late stages of the game and will head to Turin needing to overturn the result in a week's time at the Juventus stadium, the venue for this year's final. 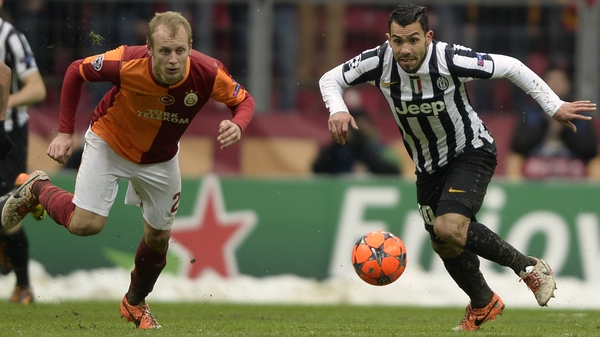