Jose Mourinho was unapologetically grumpy on the eve of the Champions League semi-final first leg at Atletico Madrid and his team were unwaveringly stubborn in a 0-0 draw at the Vicente Calderon Stadium.

Chelsea lost 2-1 to Sunderland in the Premier League last Saturday to leave Mourinho in a sour mood and the European Cup they won in 2012 their most likely trophy chance this term.

Mourinho, appearing in the semi-finals for a fifth successive season, was returning to the city which was his home for three years while Real boss as he seeks a third European Cup win on May 24 in Lisbon after successes with Porto in 2004 and Inter Milan in 2010.

The Portuguese opted for a defensive approach against Atletico, who had never lost to English visitors in nine previous matches and were the last unbeaten team in the competition.

Los Rojiblancos, in the last four for the first time in 40 years, appeared undeterred by the pedigree of Chelsea and Mourinho in the competition, but encountered a black wall of shirts.

Atletico goalkeeper Thibaut Courtois, playing against his parent club, was a spectator for much of the contest, which saw Chelsea's long-time number one Petr Cech go off injured, clutching his shoulder after a heavy fall, inside the opening 20 minutes. Mourinho has since said that Cech's season is now over.

Chelsea are likely to be a different proposition at Stamford Bridge next Wednesday, but they could be without three stalwarts in Cech, Terry and Frank Lampard, who will serve a suspension following a second-half booking.

Like Lampard, who might have been shown a second yellow card for handball, John Obi Mikel will be banned for the second leg after being booked as Chelsea's approach came at a cost.

The Blues' starting XI had an impotent look with Samuel Eto'o (knee) and Eden Hazard (calf) absent, but instead of fielding Andre Schurrle as a 'false nine' - as he did at Paris St Germain - Mourinho opted for Torres.

The much-maligned Spain striker was given a warm reception on his first return to the Vicente Calderon since his July 2007 move to Liverpool, something which was not afforded for Mourinho, who was roundly booed and abused in a partisan atmosphere.

Ashley Cole, who had played just 13 minutes for the Blues since January, slotted in seamlessly after being included in place of the suspended Branislav Ivanovic, with Cesar Azpilicueta switched to right-back.

Costa - a rumoured summer target for Mourinho - and Terry acquainted themselves in one of a number of testy opening exchanges before Cech dealt with an inswinging corner.

As he punched the ball over from underneath his own crossbar, David Luiz pushed Raul Garcia into the Chelsea goalkeeper, who hit the ground with a thud. 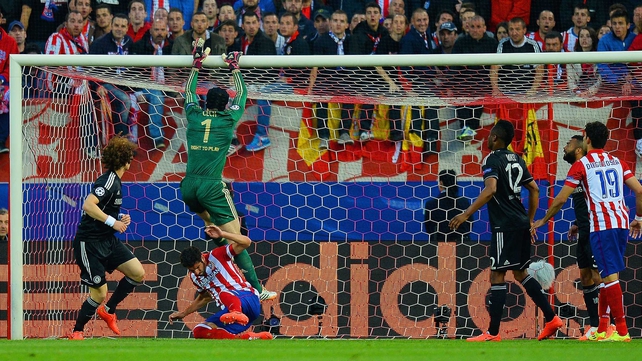 Azpilicueta threw himself towards Costa to block and Diego shot straight at Schwarzer as the half ended goalless.

Chelsea had few chances of note in the first period and Courtois was called upon only once, to claim a Lampard corner.

Lampard's shot was easily held by the Belgium goalkeeper early in the second half and then Courtois saved from Torres.

Terry was forced off after a couple of meaty challenges saw him clutching his ankle - though again, contact with Luiz may have been to blame. The Brazilian dropped into defence as Terry was replaced by Schurrle, who took Ramires' berth wide on the right.

Atletico tried to exploit the defensive reshuffle and a mazy Felipe Luis run almost led to an opening for Garcia, but Chelsea frantically cleared.

As the hosts searched for an opening the ball hit Lampard's arm, resulting in a melee with the Atletico players calling for the midfielder's dismissal.

Mikel and Gabi were booked in the aftermath, earning suspensions for both players, before Schwarzer turned Gabi's resulting free-kick round the post.

Substitute Arda Turan headed narrowly wide at the back post and Garcia also missed the target from a similar position.

Chelsea had a chance when Torres was felled by Suarez two minutes from time, but Luiz blasted the free-kick off target.

Atletico threw on David Villa to add to their forward options, but still Chelsea were resolute as Costa failed to test Schwarzer with a header in the second of five minutes of added time.

Turan fired well wide as Atletico finished frustrated and Chelsea departed to whistles from the home support; the away fans, meanwhile, lauded Mourinho and clung to the prospect of a repeat of two years ago. 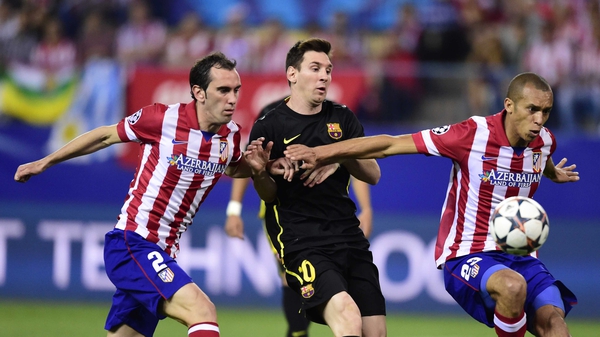