Manchester City will assess David Silva on Tuesday, after the Spanish international came off early in City’s 3-1 win over West Brom with injury.

David Silva, who shrugged off an ankle injury to make the starting line-up for City, suffered another injury following a collision midway through the second half and was carried off on a stretcher.

"David Silva has a problem with his ankle, we'll see tomorrow how it is,” City boss Manuel Pellegrini said. "He played for three games with some pain, tomorrow we'll have some news about it.

"The problem is he was playing the last game with that pain so I don't know if that pain increased or if he had another problem when he twisted his ankle today, so the doctor will see him tomorrow."

"We can still remember what happened for us two years ago, so it's kind of something where we take motivation out of it" - Vincent Kompany

Sergio Aguero was replaced by Stevan Jovetic just after the hour mark, but Pellgrini said it was not an injury substitution.

He said: "Sergio doesn't have a problem. I just thought with him after 66 minutes is what he must play, but playing the way he played today he was always running into space.

"I think it's important he recovers so he's 100 per cent fit giving him more minutes - but not at this moment the 90 minutes."

City captain Vincent Kompany, meanwhile, said after the game that it was a case of "job done" as Manchester City returned to winning ways and kept their Premier League title hopes alive.

Kompany told Sky Sports 1: "Job done and we had some very good starts in the game, so we'll take the positives out of it and take it with us into the next four games."

Kompany believes City can maintain the pressure at the top and remembered their win two seasons ago, where they stole the title in the closing minutes of the season.

"We can still remember what happened for us two years ago, so it's kind of something where we take motivation out of it,” he said.

"To be honest the most important thing is for us to get back to our beginning-of-season form.

"It looked today like we were better and if we can take that into our next four games, anything can happen."

Defender Pablo Zabaleta was pleased with the way City bounced back from their disappointment against Sunderland on Saturday, and said: "We had a strong reaction after the Sunderland game and I think we played a very good game, so now we need to keep fighting - we'll fight until the end.

"We know what happened two years ago, when we won the title so we put pressure on Liverpool and we still have four games to go.

“Hopefully, Liverpool can drop some points and we'll see what happens at the end." 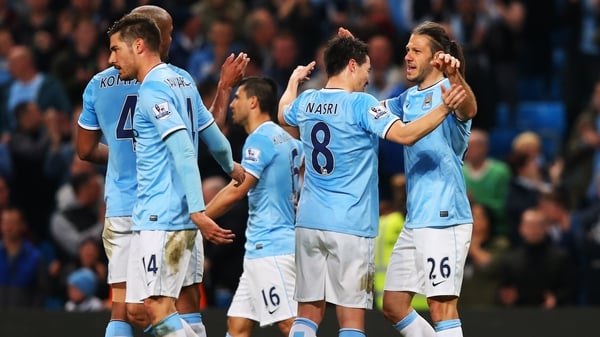