Thousands of people have attended a memorial service to mark 25 years since the Hillsborough disaster claimed the lives of 96 Liverpool fans.

Loved ones of those who died were joined at Liverpool's Anfield home by players, club officials and ordinary fans to mark Tuesday's emotional anniversary.

The 96 Liverpool fans died in the crush on the Leppings Lane terraces at Sheffield Wednesday's Hillsborough stadium after going to see their team play Nottingham Forest in an FA Cup semi-final on April 15 1989.

As the families of those who did not return home took their places in reserved seats on Anfield's famous Spion Kop for the start of the service, the crowd got to their feet as one with a roar of approval and a huge ovation from all four sides of the ground.

There were also loud cheers and clapping for the gathering of past and present Anfield greats who attended, including current club captain Steven Gerrard, Kenny Dalglish, manager at the time of the disaster, Ian Rush, Phil Thompson, Alan Hansen and Graeme Souness. 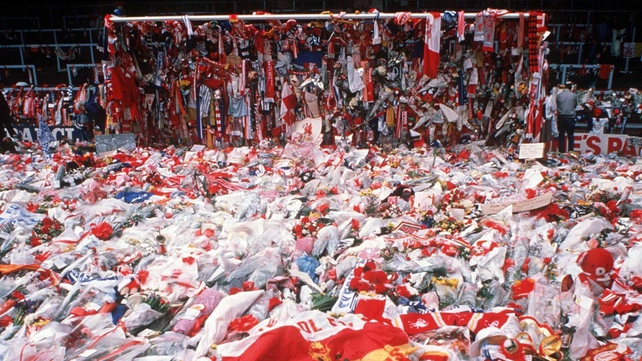 On the pitch, thousands of football scarves were laid out in the shape of "96", donated from fans and clubs across the UK and beyond after an appeal from Liverpool FC for scarves to show a symbol of unity across fan rivalries.

Traditional football hymn Abide With Me was sung before the stadium fell silent as the names of the 96 fans were read out.

At each name, a light was lit, one by one, on a large sculpture entitled the Band of Life, until all the lights were illuminated.

As the time reached 3.06pm, the exact moment the match was abandoned while the tragedy unfolded, a minute's silence began in the stadium as well as elsewhere in the city.

The silence ended with a round of applause, as across the city bells tolled 96 times at churches and civic buildings.

Martinez said he was 15 when the disaster happened.

To a huge cheer, Martinez added: "The authorities took on the wrong city if they thought they were going to get away with it."

Martinez said the Hillsborough Family Support Group, which led the campaign for new inquests, was a remarkable group of people.

He said: "I know, I don't have to tell you, Everton are with you, you know that."

Rodgers said his biggest inspiration as manager was each time he came to Anfield and seeing the names of the 96 on the Hillsborough Memorial.

He told the victims' families: "I feel very humble to be in your company.

"Your courage, fortitude, resilience and love for the people you lost, it's what inspires me, every day, as the manager of Liverpool Football Club." - Brendan Rodgers

"You are the real inspiration for us. Your courage, fortitude, resilience and love for the people you lost, it's what inspires me, every day, as the manager of Liverpool Football Club.

"Thank you for the inspiration you give us all. You'll never walk alone."

Trevor Hicks, president of the Hillsborough Family Support Group (HFSG) said Mr Burnham's involvement led to the Independent Panel Report and the quashing of the original 1991 inquest verdicts in the High Court in 2012.

Mr Hicks, who lost his daughters, Victoria, 15, and Sarah, 19, in the tragedy, paid tribute to all the families involved.

"We made it all happen," he said. "We stood together. We pulled, we pushed we refused to lie down, we refused to go away, which is something that annoyed an awful lot of people.

The service concluded with the gospel choir and the entire crowd on its feet to sing the fans' anthem, You'll Never Walk Alone as 96 red balloons were released to float into the sky.

Some of those who attended the service are due to be witnesses in the new inquest which began last month and resumes next week.

Next week, a celebration of the lives of the 96 victims is planned with a charity match in support of the Hillsborough Family Support Group.

A team of UK and Irish Liverpool legends, managed by Dalglish, will take on a side of international Reds greats, under the charge of Gerard Houllier.