Hugo Rodallega's first-half goal was enough to give Fulham a crucial 1-0 victory in their pursuit of Barclays Premier League survival and condemn Neil Adams to defeat in his first game as Norwich manager.

Rodallega's close-range finish in the 40th minute gave the Cottagers their second consecutive win for only the second time this season and moves them to within two points of safety with four matches to play.

Norwich, who have now lost their past seven away fixtures, arguably had the better chances in a pulsating contest at Craven Cottage but the visitors lacked incision in the final third.

The Canaries now face an unenviable task to hold off their relegation rivals with their remaining games coming against Liverpool, Manchester United, Chelsea and Arsenal.

Fulham made just one change from their 2-1 victory over Aston Villa as Rodallega replaced Cauley Woodrow up front.

The hosts started brightly and had the first shot of the game in the fifth minute when Pajtim Kasami drove forward from midfield but his shot from distance went well wide.

Moments later Redmond drew a sharp save at the other end with a snapshot towards Robbie Stockdale's near post as Norwich gradually settled into the game and began to enjoy the majority of possession.

Whittaker's lofted cross-field pass lured Jonny Howson into an audacious volley but his effort was deflected behind.

Just before the quarter-hour mark, a routine ball up to Kasami was flicked into the path of Rodallega who stumbled before firing wide of the far post.

Norwich were the more measured side in possession but their slow build-up play was easy to absorb for the hosts, who looked to find their front two at every opportunity.

It was the Canaries though who had the best chance of the match in the 28th minute when Martin Olsson's cross found Van Wolfswinkel and his first-time finish produced an excellent save from Stockdale.

The Fulham stopper was called into action again from the resulting corner as Fer's header was saved and Johnson put the rebound wide.

The Cottagers were rattled and with the home crowd agitated, John Heitinga committed a needless foul 25 yards out. Robert Snodgrass nearly made him pay but the midfielder's bending free-kick clipped the bar on its way over.

The home side regained their composure however and in the 40th minute took the lead as Lewis Holtby delivered a free-kick from the left and Rodallega half-volleyed high into the net from close range.

The second period began just as frantically as the first with Snodgrass testing Stockdale out early on with a shot from the edge of the box.

Rodallega almost doubled the hosts' lead in the 55th minute but his downward header was cleared off the line by Olsson.

Norwich should have equalised moments later as Johnson's chipped ball through found Olsson whose heavy touch across the box looked certain to give Snodgrass a simple finish but Brede Hangeland scrambled across to make a crucial block.

The home side seemed to lose energy as the second half went on but while Norwich began to dominate possession, the visitors struggled to create any clear-cut chances.

Turner went close from a corner in the 74th minute but his header towards goal was diverted away by Rodallega.

Instead it was the Cottagers who should have finished with a flourish as Ashkan Dejagah blazed over with only the keeper to beat but it made no difference as the hosts were able to see out a vital victory in the race for survival. 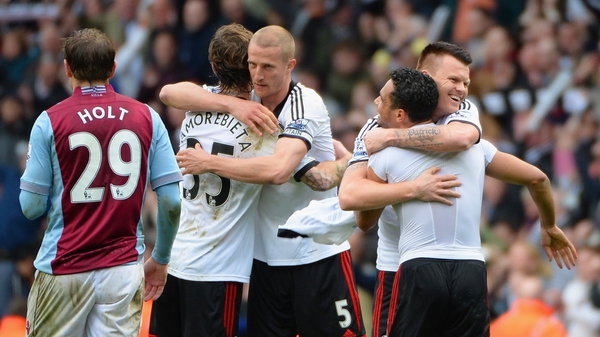