Jose Mourinho has no particular desire to take on former club Real Madrid in the Champions League semi-finals, when he believes Chelsea's "special spirit" can again prove the difference.

After falling to a 3-1 defeat at Paris Saint-Germain last week, it looked a big ask for the west Londoners to progress from their quarter-final second leg on Tuesday.

However, substitute Andre Schurrle gave the hosts hope before fellow replacement - and boyhood PSG fan - Demba Ba netted at the death to secure a 2-0 win on the night, putting them through on away goals.

The semi-final line-up will be decided this evening with the matches in Munich and Madrid - a city guaranteed at least one representative after Real Madrid saw off Borussia Dortmund.

A clash between Chelsea and Los Blancos would be a fascinating match for the neutrals after Mourinho left the Santiago Bernabeu to return to Stamford Bridge in the summer.

However, asked if he wanted to face his former club, the Portuguese said after a pause: "No, not really. Real Madrid, Barcelona, Atletico, Bayern, Manchester - it doesn't matter.

"We are in the semi-finals and if the quarter-finals had eight fantastic teams, imagine the four that are going to reach the semi-finals. Anything can happen.

"A big opponent is waiting for us in the semi-final, but I think it doesn't matter who.

"They know that we are a team with a special spirit, even if we are not in the maximum of our potential.

"[Nemanja] Matic and [Mohamed] Salah cannot play in the Champions League and we always have somebody suspended. It was Ramires today, the next one is [Branislav] Ivanovic.

"But, for sure, we are going to enjoy the same way I told the players we had to enjoy this second leg in the quarter-final.

"We have to enjoy to play against the great opponent waiting for us."

"A big opponent is waiting for us in the semi-final, but I think it doesn't matter who" - Jose Mourinho

Chelsea will find out who they will face in the semi-finals on Friday, by which point the severity of Eden Hazard's injury should be clear.

The in-form Belgium international was forced off after 18 minutes at Stamford Bridge through injury and Mourinho warns he could be set for a spell on the sidelines.

"When he comes off after 10 minutes, he was saying that he couldn't do it," he said.

"It is some problem with this calf. It's a muscular problem and, even when they are not serious, you cannot normally play for a couple of weeks, minimum.

"But I have no idea the dimension of his injury."

While Chelsea booked their place in a seventh semi-final in 11 campaigns, PSG failed to make it past the last-eight juncture for the second season in a row.

"There were a number of things that didn't work and some things did," manager Laurent Blanc said.

"We started the game better than we did in the first leg in Paris and managed the first 25 minutes before conceding when we least expected it and that gave Chelsea belief.

"In the second half Chelsea were better and we lacked fluidity, but I think we might have scored on the counter.

"Ultimately, Chelsea believed right to the end and were rewarded and good luck to them." 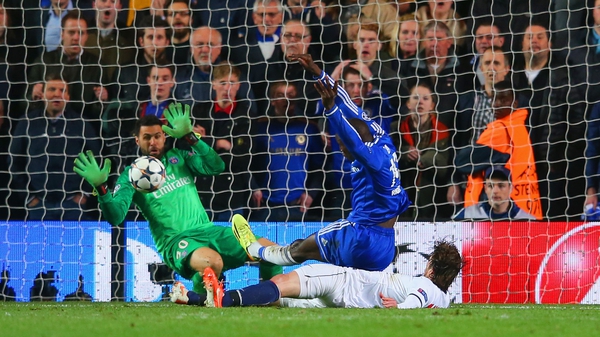