Tottenham Hotspur manager Tim Sherwood came out fighting on Monday as his side ended a day full of speculation about his future with a 5-1 crushing of Sunderland in the English Premier League.

All eyes were on Sherwood after a report that he would be replaced at the end of the season dominated the pre-match talk.

However, the 45-year-old did not look like a man about to be sacked as he went through his usual array of touchline theatrics, clearly revelling in a victory that just about keeps his side in the hunt for a top-four finish and Champions League football.

"I'm the best manager this club has ever seen," Sherwood joked with reporters after being asked whether he was the best man for the job.

"I can't affect that," he said when asked about the speculation. "It doesn't affect me.”

"The players are backing me and I back them. What they get from me is honesty" - Tim Sherwood

Sherwood was referring to statistics that show his points per game ratio in the Premier League exceeds any previous incumbent since he stepped up from coaching the under-18s to be given an 18-month contract in the wake of the sacking of Andre Villas-Boas in December.

"I have been given an opportunity to manage this football club and I owe it to the fans ... to do the job professionally and I just get on with the job.

"We got five [goals] and it should have been more. You can't do too much more than that.

"It can be tricky when teams are fighting for their lives but I said to the boys take the shackles off now, you've got six more games and go and win all of them and see where it takes us."

Earlier Tottenham described reports that Sherwood would be relieved of his duties in the summer as "speculation", saying that they would talk to the manager at the end of the season to review how things have progressed.

Two goals from striker Emmanuel Adebayor, who Sherwood restored to the team in the wake of Villas-Boas's sacking, and a superb display by Danish midfielder Christian Eriksen who chipped in with a goal and two assists, earned Sherwood his 10th win in 17 Premier League games - a healthy record for a rookie at this level.

Adebayor led the praise by saluting Sherwood after his goals and bringing a smile to the face of a manager who, as in his playing days, wears his heart very much on his sleeve.

"I'm not surprised Ade backed me - he never played before I got here!" joked Sherwood.

"The players are backing me and I back them. What they get from me is honesty. When they don't do it I tell them and when they do well I pat them on the back. That's healthy. I always wanted honesty from my managers and didn't always get it."

Sherwood refused to be drawn on his future at the club, saying it was a matter for his employers to sort out.

He said he was instead concentrating on a strong finish in a season that began following the sale of Gareth Bale to Real Madrid and a rash of big-money signings who have struggled to gel at times, faring badly against the top clubs.

A 4-0 thrashing at Chelsea last month led Sherwood to accuse some of his players of "lacking guts" while another heavy defeat at Liverpool in their previous game appeared to end any hopes of a top four challenge - undermining Sherwood's position at the same time.

After brushing aside a relegation-bound Sunderland side with a confident display, however, Tottenham returned to sixth place, five points behind north London rivals Arsenal in fourth and four behind in-form Everton, who Sherwood says are favourites to claim the final Champions League spot. While outsiders, Sherwood said there is still hope.

"We are just thinking about winning the next five games and hopefully someone else slips up but Everton have been magnificent, going about their business very quietly and building a team," he added. 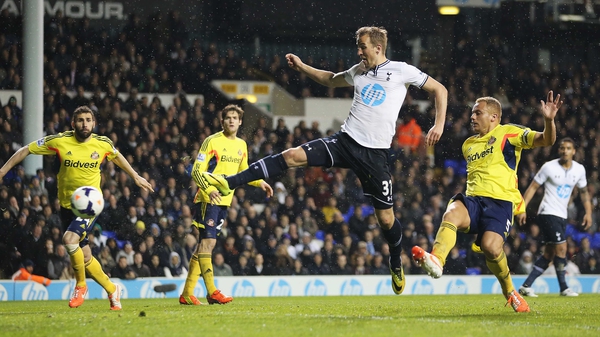